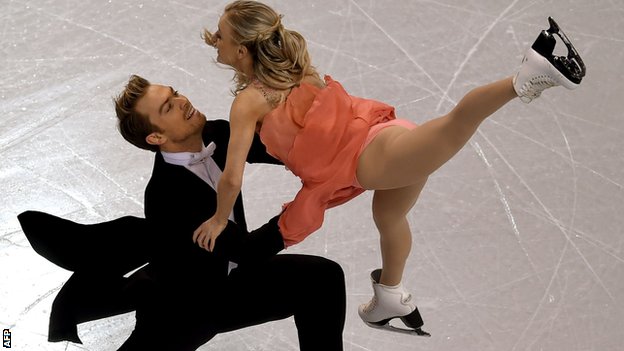 Coomes and Buckland teamed up in 2005

"We really wanted to leave it all out on the ice tonight and we did that," Buckland, 26, told BBC Sport.

France's Gabriella Papadakis and Guillaume Cizeron retained their world title with a score of 194.46.

Maia and Alex Shibutani (188.43) were second, with fellow Americans Madison Chock and Evan Bates, who train alongside Coomes and Buckland, third (185.77).

Coomes and Buckland, from Nottingham, were making a comeback having missed last year's World and European championships through illness.

"I was so in-the-moment, so involved in that performance," said Coomes, who turns 27 on Wednesday. "I lived every second and thoroughly enjoyed it."

Join the conversation at @bbcgetinspired

What is Get Inspired?

Find out about the BBC's participation project