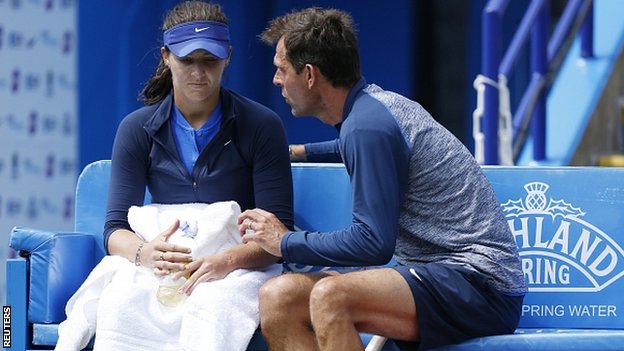 Wimbledon 2016: Laura Robson says she will be fit for tournament

Wildcard Laura Robson says she will be fit for Wimbledon despite pulling out of Eastbourne with a thigh injury.

The 22-year-old former British number one was forced to retire from her qualifying match against American Madison Brengle on Sunday.

But on Monday she tweeted: "Getting solid treatment on my leg and will be all good for Wimbledon."

Robson is currently ranked 308 in the world after missing much of 2014 and 2015 with a wrist problem.

She finally returned to action at Indian Wells in March this year, her first WTA Tour event since August 2015.

The Australia-born player had wrist surgery in April 2014 and as consequence was sidelined for more than a year. She then had further surgery towards the end of 2015, which led to her missing the 2016 Australian Open in January.

The 2008 Wimbledon junior champion achieved a career-high ranking of 27 in 2013, having reached the last 16 of Wimbledon that year and the US Open in 2012, before suffering the wrist injury.

She has been awarded a wildcard for this year's Wimbledon, which begins on Monday, 27 June.