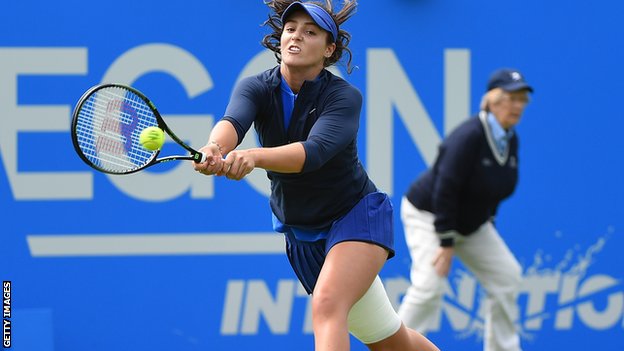 Laura Robson forced to retire from Eastbourne through injury

Laura Robson has been forced to retire from her qualifying match against American Madison Brengle at Eastbourne because of a thigh injury.

The former British number one, 22, arrived on court with heavy strapping around her right leg and fell a set and a break behind before pulling out.

Robson is currently ranked 308 in the world after missing much of 2014 and 2015 with a wrist problem.

Her latest injury comes four days after she was awarded a Wimbledon wildcard.

Robson won the junior Wimbledon title in 2008 and reached a career-high of 27 in the world rankings in July 2013 after making it through to the last 16 at the All England Club.

Meanwhile, Denmark's Caroline Wozniacki advanced to the second round at Eastbourne with a 6-1 6-3 win over France's Alize Cornet.

The 2009 champion won the first set comprehensively and recovered from a break in the second set to clinch a comfortable victory.

The field at Devonshire Park features seven former tournament champions including 2008 winner Agnieszka Radwanska of Poland, who is the top seed this year.

Konta, as one of the 16 seeds, has a bye into the second round but Watson, Broady and Moore are all in first-round action on Monday.