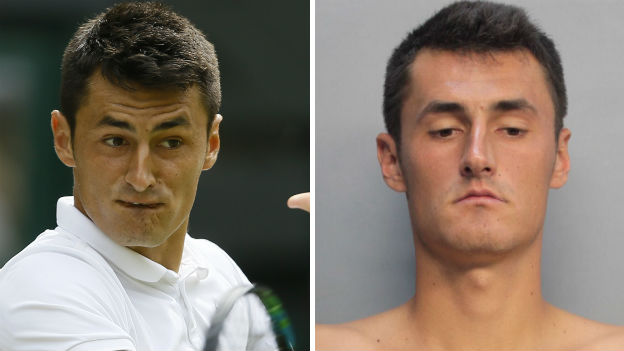 Australian tennis player Bernard Tomic has apologised after being charged with resisting arrest and trespassing by Miami Beach Police.

The 22-year-old was accused of refusing to leave his hotel room after an alleged altercation with staff and police on Wednesday.

Tomic told local television: "I'm sorry for the the disturbance I caused."

Witnesses claim Tomic was asked to turn down his music following complaints from other residents.

According to the arrest affidavit, witnesses said Tomic "pointed his finger aggressively towards hotel security" at the W Hotel after several reports of a raucous party in his rooms.

It is claimed that when police arrived and attempted to evict the world number 25, guests of the player departed and Tomic verbally and physically disobeyed officers.

"It was definitely my fault," he told CBS4 News  in Miami. "I was asleep on several occasions when they complained at first, but you know, it was just a noise complaint.

"I'm just happy I got out and no one got hurt."

Tomic, whose address is listed as Key Biscayne, Florida on the affidavit, was in Miami after being omitted from Australia's Davis Cup quarter-final squad to face Kazakhstan this weekend in an ongoing dispute with Tennis Australia.

He accused the governing body of abandoning him after he had hip surgery last year.

The two-time ATP Tour winner had played in the Hall of Fame championships match in Newport, Rhode Island, USA - which Tennis Australia referred to as 'Hall of Shame' in a media release. The governing body later apologised.