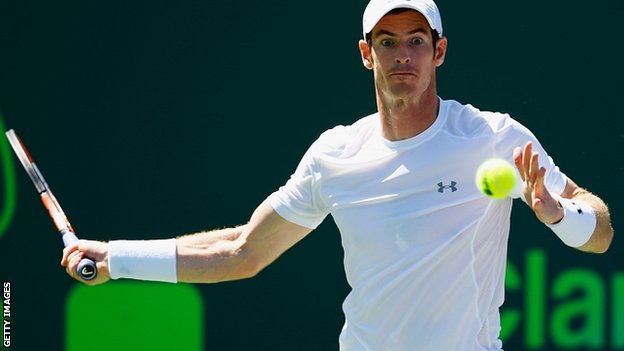 Murray lives and trains in Miami for much of the year

Another victory would make Murray the 46th man in the open era to reach 500 match wins.

Murray, 27, lost heavily to Giraldo in Madrid last year but made amends in Miami, where he lives and trains for much of the year.

The Scot attacked his opponent's second serve from the outset, breaking in game six on his way to the first set and then powering 4-0 clear in the second.

There was a late revival from the now free-swinging Giraldo, who saved two match points and broke serve at 5-2 and saw off another two at 5-4.

It delayed Murray but did not derail him, and the world number four finally sealed victory at the fifth attempt thanks to a net cord.

Looking ahead to a potential landmark win on Tuesday, Murray told BBC Sport: "Getting to 500 wins is a lot. There's not loads of players that have done it.

"Hopefully it happens in a couple of days, if not then hopefully later on in the year I'll win another match and have the opportunity to win many more.

"It's a nice milestone to reach when I get there."

Nadal goes out to Verdasco

Rafael Nadal admitted he was "playing with too much nerves" after losing 6-4 2-6 6-3 to fellow Spaniard Fernando Verdasco.

The second seed said recent injury problems were not to blame for his exit, and explained: "The physical problems are in the past. Now I need to fix again the nerves, the self-control on court.

Bellis, ranked 211th by the WTA, remains an amateur despite beating Dominika Cibulkova at the US Open last year, and she saw off 29th seed Zarina Diyas in her opening match in Miami.

Williams, 18 years older than her compatriot, was not about to fall victim to another upset and won 6-1 6-1 in windy conditions.

"It was a good match, she plays really well and I'm just out here trying to take the title," said Williams. "It's just good to see another American doing well."

Best of the rest