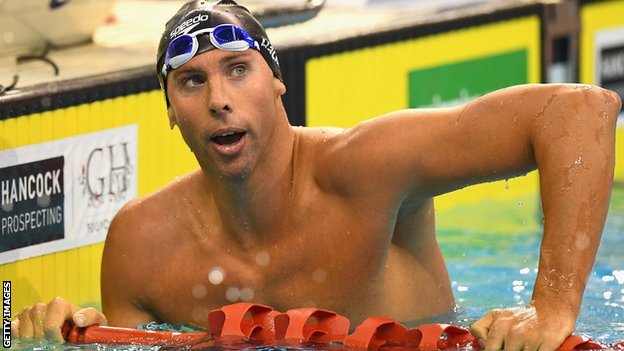 Grant Hackett had been hoping to compete at this summer's Rio Olympics, but failed to qualify

A former Olympic swimming champion has apologised after claims he groped and assaulted a fellow airline passenger.

Australian Grant Hackett reportedly took exception to a male passenger reclining in the seat in front of him.

The man told the Herald-Sun  that Hackett, 35, "yanked the seat back", adding: "Then he groped my chest and tweaked my nipple quite forcefully."

Hackett said in a statement: "I have stuffed up more than once and am working on these issues."

He added: "I seriously and genuinely regret my poor behaviour. It is embarrassing to hear and read the consequences of my actions.

"I apologise unreservedly to the gentleman on the flight. I am trying to make direct contact with him."

Gary Pert, chief executive of Australian rules football side Collingwood, was also on the flight and said Hackett appeared to be "affected by alcohol".

Speaking to Melbourne radio station 3AW,  he said: "One of the passengers in front of him put his chair back and Grant just leant forward, put his hand between the seat and appeared to just tap the person.

"He was not aggressive or upset."

Hackett won Olympic gold in the 1500m freestyle in both 2000 and 2004 and had a long-standing rivalry with compatriot Ian Thorpe.

Hackett recently came out of retirement in the hope of becoming the oldest Australian swimmer to compete at the Olympics, but failed to qualify.

It was reported he was questioned by police when the plane landed at Melbourne Airport, with Australian Federal Police only confirming they spoke to a 35-year-old man and no charges were laid.

Get Inspired for Sport Relief

Find out how to get involved in Sport Relief 2016