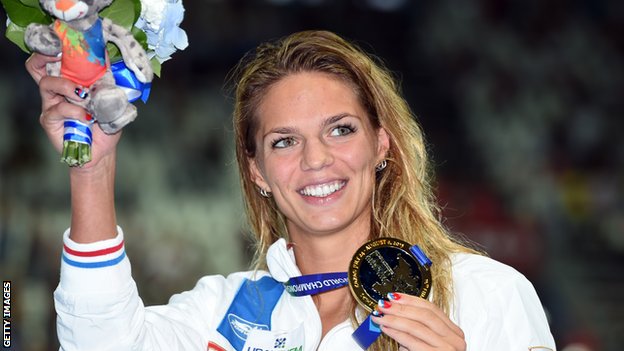 Russia's Yuliya Efimova has been temporarily suspended after testing positive for meldonium.

The London 2012 bronze medallist could now be facing a life ban having previously failed a drugs test.

Meldonium was added to the World Anti-Doping Agency's banned list on 1 January 2016.

So far more than 100 athletes in various sports have tested positive for the drug, including Russia's grand slam-winning tennis player Maria Sharapova.

Bobsledder Sergeeva, 28, who competed at the 2014 Sochi Games, told the R-Sport news agency she took the drug at the end of last year under the instructions of doctors and cardiologists and expected it to have left her system by the 1 January deadline.

US-based Efimova was banned for 16 months by Fina after traces of the anabolic steroid DHEA (dehydroepiandrosterone) were found in her system at an out of competition test in Los Angeles in 2013.