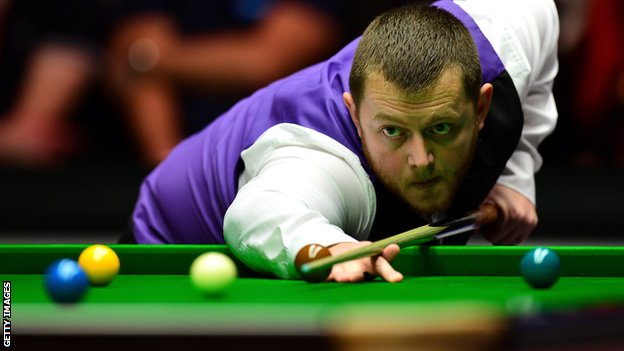 By Owen Phillips BBC Sport at the Crucible Theatre, Sheffield

Mark Allen says he must not allow himself to get frustrated when he faces debutant Mitchell Mann in the first round of the World Championship.

The Antrim man, 30, begins his Crucible quest full of confidence after winning the Players Championship last month, his third success in a ranking event.

"I think he will try to slow the match down and try to drag me down a little bit," said the world number seven.

"But I don't think he can outscore me or outplay me in any way," added Allen.

The Northern Irishman told BBC Sport he knows he cannot afford to be complacent, despite being such a strong favourite against the world number 74 - the only rookie in this year's tournament.

Birmingham player Mann, 24, booked his place at the Crucible by beating Thai talent Dechawat Poomjaeng 10-9 in the final qualifying round on Wednesday.

'Best draw I could have got'

"On paper it was probably the best draw I could have got," Allen observed. "But you don't play snooker on paper.

"Mitchell beat me in qualifying for China Open earlier in the season so I know what to expect. He will try to frustrate me.

"But this is the World Championship, not the China Open. I like being in Sheffield and plan on staying here past Wednesday so I will not be letting his tactics get to me. I will worry about my own game and, if I play well, I will win."

Allen said playing at snooker's showpiece event in Sheffield continues to provide a huge buzz and understandable anxiety, but he expects Mann to be affected by nerves.

Allen added: "It's his first time at the Crucible and I remember my first time and thinking, 'just don't fall down the steps'.

"It is so nerve-wracking. And it is still nerve-wracking now. You would think you would get used to it but it's a different sort of pressure here. It is an unreal experience.

"Mitchell is a good lad, a cracking guy. Hopefully he can come here and embrace it, but not too much."

The former world semi-finalist knows he carries the burden of expectation from home as he looks to become the first Northern Ireland player to win the world title since Dennis Taylor in 1985.

But that will be a long way from his thoughts when he starts his match on Tuesday afternoon.

"I do understand and appreciate the support I get from back home," Allen said. "There is a massive following. People you don't expect to be watching snooker watch when I am playing.

"It's been a few years since I have gone deep here but I have always felt like I have played okay here. I have just come up against players who have played better in the last few years.

"Everyone will be playing reasonably well, it is who can play exceptionally well."