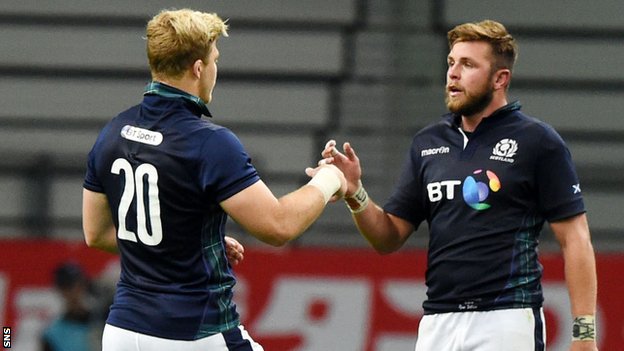 David Denton was on the field for less than 20 minutes against Japan on Saturday, but in searching for an explanation for some of the deadness in Scotland's performance the number eight mentioned the stifling humidity at the Toyota Stadium.

"A lot of the boys are saying that that was one of the hardest Test matches they've ever played in, just because of the humidity," said Denton following the 26-13 win.

"It takes a lot out of you, we're just not used to playing in that. The last time we had that was when we played Samoa and Fiji."

Those Tests were in the heat of Apia and Lautoka and brought Scotland two scratchy wins. And here was another. Denton wasn't using the temperature as an excuse rather than part of an explanation for a patchy-to-poor first Test against a drastically under-strength Japan.

Had the locals had Michael Leitch, Ayumu Goromaru, Akihito Yamada and Male Sa'u in their ranks - heroes all from the 2015 World Cup win over South Africa - then Scotland might have paid for their lack of composure and cohesion, their inability to get dominance and their failure to put Japan away.

Of course, Scotland can cite missing players of their own, but the hope here was that they wouldn't need to cite anything in mitigation, not absent talent or weather or time apart as a team. You hoped they would turn up, gel quickly and put Japan to the sword. They didn't - and there was a flatness in the aftermath as a result.

One of the impressive things about Vern Cotter's team is their honesty in assessing themselves. Greig Laidlaw, who kicked like a dream, is uncompromising on that front. "We played in fits and starts," said the captain.

"We need to look at ourselves. There are positives in a win, and it's good to win at this level, but I think we can tighten up. I was a little disappointed in the maul on a couple of occasions. We coughed the ball up a couple of times."

Scotland need to tighten up - Laidlaw

This was hardly at the cutting edge of world rugby on Saturday. It wasn't Wellington, where Wales were gallant in defeat against New Zealand, or Melbourne, where England were extraordinary in victory over Australia. It wasn't Johannesburg, either, where Ireland were ahead for much of it but got overtaken at the end of a monumental match against South Africa.

The Test in Toyota City was low-key stuff in front of a half-empty stadium. Wishy-washy rugby. It required professionalism to get the job done, though, and Scotland had enough of it on the night. Their set-piece was impressive - lineout and scrum. They caused Japan unmerciful problems at the breakdown. Their defence was strong and their discipline important.

That was Japan's undoing. Their penalty count was knocking on for double Scotland's and they had two sin-binnings that cost them 14 points. That was the game right there. When Hendrik Tui got done, Scotland punished Japan while he was away. When Rikiya Matsuda got done, Scotland punished them again. Their ruthlessness in those moments was key. In the context of the match, it was everything.

"Scotland had three penalties that weren't penalties, that was clear and obvious up in the box," said Japan coach Mark Hammett of the first-half barrage of indiscipline.

"But you have got to roll with those and even if you get some bad calls, you have to understand that you are going to be under the pump and you have to keep clean. That cost us.

"Ultimately the yellow cards were fair yellow cards, but were made worse when you are under the microscope for earlier ones. For any team, you have got to get your discipline right."

Try-scorer WP Nel (left) did not finish the match

Scotland could have made it more comfortable but weren't slick enough or aware enough to take advantage. All those who spoke later said it would be different in Tokyo on Saturday, that they needed this game to get back up to the pitch of a Test match.

Hammett said something similar. He also floated the notion of what Japan might be capable of if they could only keep their heads a bit better next time. "Take the yellow cards out of it and it's an even game," he said of the game at the Toyota Stadium. "Next Saturday will be intriguing."

Scotland have a few injury worries. Alasdair Dickinson is out of the tour with a hamstring injury sustained in the opening minutes in Toyota City.

Gordon Reid is on his way to Tokyo as replacement. The Scotland management are also monitoring Duncan Taylor (hamstring), John Barclay (knee) and WP Nel (knee).

There should be a bigger crowd - the attendance on Saturday was shy of 25,000 - and both sides should bring more to the table.

More is needed. Scotland won, but it wasn't convincing.

In fairness to the tourists, nobody in their camp was claiming that it was. They set themselves higher standards these days.

All of them knew they're capable of a whole lot more than this.