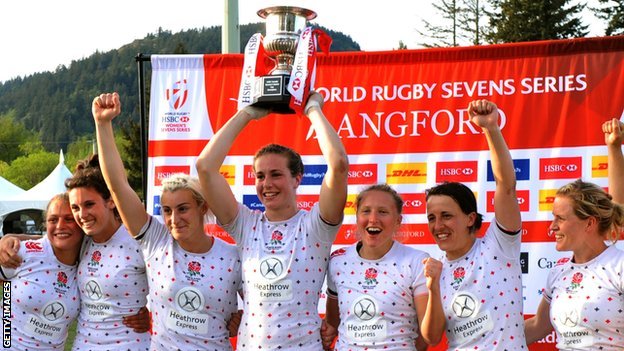 Australia, beaten by England in the semi-finals, had won all three of the season's previous tournaments.

"We really are building," said England captain Emily Scarratt. "We've gone away and worked really hard and that was the product of it."

She added: "We knew it would be a tough game but that if we played to our style we could win. We're tired but we are very happy."

Ireland finished 11th by beating Japan 12-5 but remain bottom of the 12-team standings.

New Zealand are second with 64 points, 12 behind Australia, but are unlikely to catch the leaders.

Should New Zealand win the next tournament, Australia would have to finish eighth or lower for them to top the rankings.

The final tournament of the season takes place in the French city of Clermont-Ferrand on 28-29 May.

More from Sport and Rugby Union