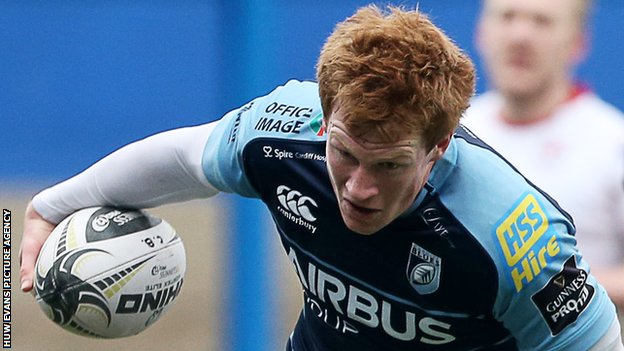 Rhys Patchell says Cardiff Blues is a "good place to come to work" as they battle for European qualification in the Pro12.

Sunday's derby against Newport Gwent Dragons will see the 22-year-old Wales international play his last game at the Arms Park before joining Scarlets.

Patchell insists he has no regrets about leaving despite the capital region's improvement this season.

"Once you make a decision you've got to back yourself," he said.

"Do I regret it? No. Am I pleased the Blues region is going in the direction that it is? Yes."

Patchell's decision to join Scarlets came after playing much of his Blues rugby at full-back rather than his preferred position at fly-half.

Gareth Anscombe has been favoured at number 10, though Patchell's versatility has been a key factor in the Blues' revival as a force in the Welsh game.

Their impressive 28-22 win over Scarlets on 2 April saw Anscombe, Patchell and Dan Fish alternating as first receiver as the Blues claimed their third Welsh derby win of the season.

Why are the Blues so happy?

The fluid attacking style developing under Danny Wilson - in his first full season as head coach - is making for a happy squad, according to Patchell.

"We've found a style of play that really suits us - not necessarily one way because we have to adapt - but a style that everyone has bought in to and I think that's half the battle," he said.

"It's like when you're playing under-14s, you want to get everyone involved because everybody enjoys it and everybody plays better and that has something to do with it.

"The place is a good place to come in to work at the moment and that's really exciting."

The Dragons, who beat Gloucester 23-21 away in the quarter-final of the European Challenge Cup in their last match, will be a major obstacle for the Blues.

And Patchell admires the way they have coped after a run of injuries to key players including Hallam Amos, Tyler Morgan and Dorian Jones.

"Losing Dorian just after Christmas was a big blow for them, he was playing well. But Hallam is coming back, Tyler is back, and obviously Taulupe [Faletau] is a big player for them as well.

"They had a phenomenal result in Europe and we have no illusions about the challenge the Dragons will pose."

Wins against the Dragons and Ospreys on 30 April could see the Blues playing for a top-six finish at Edinburgh on 7 May, when Patchell will make his final appearance for the region, if selected.

He says it will be an emotional farewell.

"I think it will probably, because I've spent my whole professional life here," he conceded.

"[In 2011] I finished my A-levels on Friday and turned up here on Monday and [coach] Dai Young left on Tuesday and I was thinking, 'oh no'."

Patchell has since played under coaches Phil Davies, Mark Hammett, the caretaker pairing of Dale McIntosh and Paul John, and finally Wilson.

Despite the upheaval, Patchell exudes nothing but goodwill toward the region.

"I've got a lot of friends here, the place has been great to me, the supporters have been fantastic," he added.

Keep up with Welsh rugby

All the latest Welsh rugby news and analysis