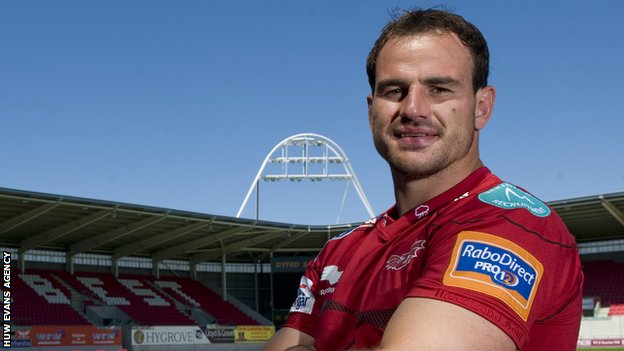 South African-born lock George Earle has signed a contract extension to keep him at the Scarlets beyond the end of this season.

The deal ensures Earle, 28, qualifies for Wales on residency ahead of the 2015 World Cup.

He arrived in Llanelli in August, 2012 from South African side Cheetahs.

"I've been around a couple of teams but this is where I feel I belong. It was the easiest decision of my life to extend my contract here," said Earle.

Scarlets have not announced the length of Earle's new deal.

He was signed by former boss Nigel Davies, played under successor Simon Easterby and has now been retained by Wayne Pivac, who took over in the summer of 2014.

Pivac said: "He's fitted in well and brings some seniority and maturity to the group.

"With such a young average age in the squad it is important to get that blend of experience and youth and having strong characters and leaders like George in the mix is important to achieve that balance."

They lie eighth in the Pro12 table, but retain hopes of qualifying automatically for the 2015-16 European Cup with a top six finish.

However, a team finishing seventh could also reach Europe's top flight if they win a play-off series involving a club each from England and France.

Earle said: "We may have taken a back step this season, but I feel over the last two or three seasons we've really improved as a squad.

"I feel the breakthrough is really near and I want to be a part of that."

Keep up with Welsh rugby

All the latest Welsh rugby news and analysis