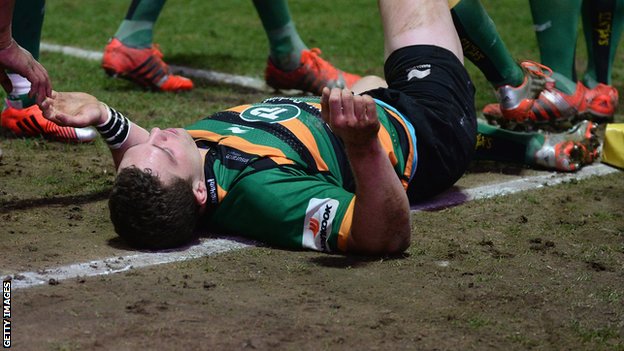 Former Wales flanker Martyn Williams would back a decision to rest George North for the remainder of the season.

Wales wing North will see a specialist this week after being knocked out in Northampton's win over Wasps on Friday.

The 22-year-old also suffered blows to the head in the autumn and again during the Six Nations.

"If he doesn't play again for the rest of the season so be it. George's health comes first," said Williams.

North, was left motionless after a knee to the head from Wasps' Nathan Hughes after a scoring his second try for the Saints in their 52-30 win.

Wasps forward Hughes was sent off for dangerous play, but protested his innocence.

On Saturday morning, North thanked his followers on his Twitter account for all the messages of goodwill and said: "Feeling ok, up and about."

North suffered two blows to the head against England in the Six Nations opener in Cardiff, which prompted controversy as he was allowed to play on.

He missed Wales' next match against Scotland after being given an "extended recovery period".

Ahead of the 2015 Six Nations, Ireland's Jonathan Sexton completed an enforced 12-week lay-off following four concussions in a year.

Williams told BBC Wales' rugby programme Scrum V he would not be against North having a similar enforced length of time on the sidelines.

"If the specialists say you need a break, definitely have a break," he said.

"You can't ignore that [medical] advice," said Jones. "It's too important. If that advice comes you have to take it."

The glorious chaos of the Six Nations finale let us fall back in love with a rugby we thought had died, writes Tom Fordyce.