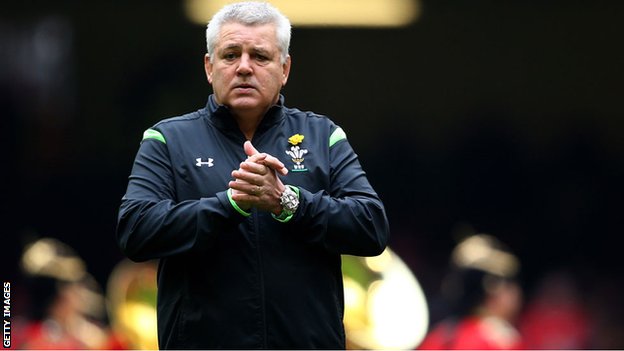 Warren Gatland has done an "amazing" job as Wales coach and does not deserve the criticism levelled at his playing style, says Sir Clive Woodward.

New Zealander Gatland has led Wales to two Six Nations Grand Slams but his conservative tactics have led to some critics calling it "Warrenball".

"He's done an amazing job with Wales - just look at the record."

Wales won the 2008 and 2012 titles under Gatland and the 2013 championship while he was on a sabbatical coaching the British and Irish Lions.

Six Nations Catch-Up: The best action from the final week

The Lions subsequently went on to beat Australia 2-1 in the 2013 Test series.

Wales finished third in the 2015 Six Nations, losing out on points difference to champions Ireland and second-placed England, with all three teams winning four of their five matches.

"To bounce back from losing that opening game [against England] was amazing with wins in France and Scotland. They've got a great team."

Woodward also believes Wales, along with England and Ireland, will present a serious northern hemisphere challenge to the dominance of the Wallabies, New Zealand and South Africa in the 2015 World Cup, which gets under way in September.

"With Wales the longer they're together the better they become, and Gatland has the team together for a long time going in to the World Cup," he said.

"So Wales are a real threat, there's no doubt about it, when they're at full steam they're hard to stop no matter how they play.

"They've got great players across the board, and Scott Williams had a great Six Nations coming off the bench, so they're starting to get a bit of depth."

Hosts England face 2011 semi-finalists Wales in Pool A at Twickenham on Saturday, 26 September.

The pool also includes the 1991 and 1999 champions Australia, plus Fiji and Uruguay.

The glorious chaos of the Six Nations finale let us fall back in love with a rugby we thought had died, writes Tom Fordyce.