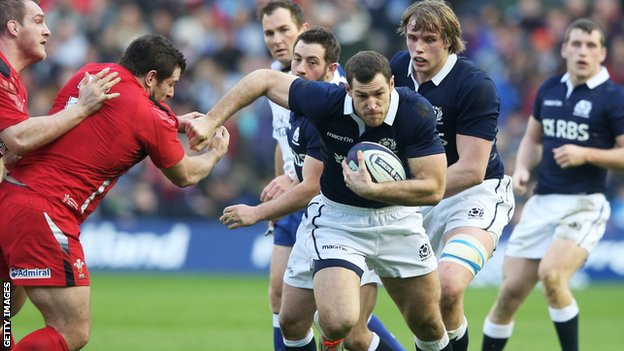 Scotland international Tim Visser will join Harlequins from Edinburgh at the end of the season.

The Netherlands-born winger has spent four years playing in Scotland, having been signed by Edinburgh following two years with Newcastle.

The 27-year-old said: "I am delighted to join a club with as much heritage as Harlequins.

"It's a dream come true and I'm looking forward to meeting my new team-mates and helping the club move forward."

Visser has been the Pro12's leading try scorer for the past four seasons and was Edinburgh's player of the year in 2012.

He made his debut for Scotland that year , scoring two tries against Fiji, and has since gone on to play a further 16 Tests and score five more tries.

Harlequins director of rugby Conor O'Shea said: "We are delighted to welcome Tim to the club.

"He is and always has been a finisher and, with the margins between winning and losing so small, players like Tim can be the difference.

"He is a great man who is really driven to succeed. We are looking forward to welcoming him to Harlequins next season."

Quins are currently eighth in the Premiership and have already announced the arrivals of Australia lock James Horwill and ex-Wales prop Adam Jones.

Wales and Racing Metro centre Jamie Roberts is also a target, with O'Shea keen to add more new faces to his squad.

"We'll work away in the background within the rules of the game," O'Shea told BBC Radio 5 live. "The salary cap is there for everyone to work within and we'll work within it and bring in the players we can."

When asked about Roberts, O'Shea replied: "I'll see if I can talk to him, I'll try and find his phone number."

Harlequins reached the Premiership play-offs last season but now face an uphill task to make the top six this term after Saturday's heavy 42-14 defeat by Saracens at Wembley.

"Mentally and confidence-wise, we are not in a great place," O'Shea admitted. "We'll come through this but there's no short-term cure. The cure is working hard and sticking together.

"We're a really proud bunch and we are really down. The hard part is mentally and that's what we have to pick up, and we will."

More from Sport and Rugby Union