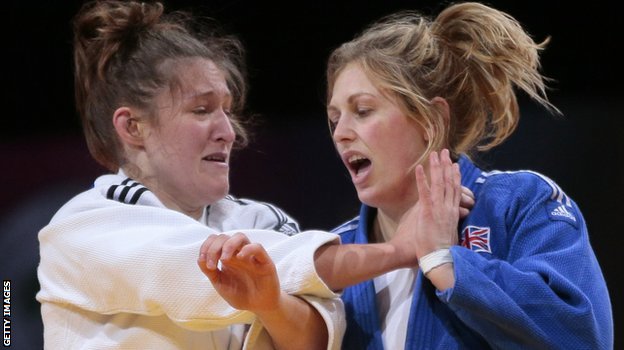 Athletics: While thousands will be pounding the streets for charity, Britain's elite athletes will see the London Marathon as a chance to earn selection for the Olympics. Scott Overall and Callum Hawkins have already achieved the qualifying time so finishing among the top two Britons would book them a place at Rio 2016. Sonia Samuels and Alyson Dixon will be looking to do the same in the women's event. Details of live BBC TV and radio coverage

Diving: The fourth and final leg of this year's World Series is staged in the Russian city of Kazan (22-24 April). China's divers are unbeaten in the eight Olympic disciplines so far, while Britain's new synchronised 10m platform partnerships of Tom Daley and Daniel Goodfellow and Tonia Couch and Lois Toulson have earned medals at each of the previous three rounds.

Fencing: The test event for the Olympic tournament takes place in Rio.

Gymnastics: The final Olympics qualifier also doubles up as the Rio test event. Great Britain are still looking for an Olympic qualification place in the men's trampoline event, with Nathan Bailey needing to finish in the top eight to earn a male quota place for Rio.

Becky Downie and Gabby Jupp will compete in the women's artistic event, with Nile Wilson and Brinn Bevan in the men's equivalent.

Judo: Commonwealth champion Natalie Powell and Olympic silver medallist Gemma Gibbons lead a 14-strong British team chasing medals and ranking points towards Olympic qualification at the European Championships in Kazan, Russia (21-24 April). Britain's last medal at the event was won in 2013 by Ashley McKenzie, who is also part of the team.

Mountain bike: The first round of the 2016 Mountain Bike World Cup takes place in Cairns (23-24 April) - it is a dress rehearsal for the 2017 World Championships, which will also be held in the Australian city.

Road cycling: The prestigious La Flèche Wallonne is on 20 April in Belgium. Five-time winner Marianne Vos will make her first WorldTour appearance of 2016 after missing the bulk of last season with injury, while Alejandro Valverde will defend his crowd in the men's race. Four days later the Spaniard will also be on the start line as the reigning champion in Liege-Bastogne-Liege, the fourth Monument of the season.

Taekwondo: British world champion Bianca Walkden will be vying for a third successive title when she competes in the German Open in Hamburg (22-24 April). Her flat-mate, Olympic gold medallist Jade Jones, competes for the first time this season after a niggling knee problem.

Triathlon: It is the third round of the World Series in Cape Town on 24 April. Britain's Helen Jenkins all but secured her Olympic spot with victory at the last round in Australia. Jenkins is not racing this weekend - Vicky Holland and Non Stanford, already confirmed for Rio, do take to the start line in South Africa. In the men's race, both Brownlee brothers will feature for Britain. Jonathan took bronze in Australia last time out, while brother Alistair - the reigning Olympic champion - was 36th. Details of live coverage on BBC Red Button. 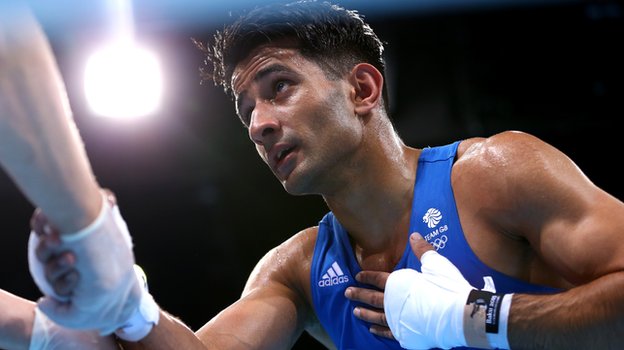 They will be joined by Ireland's David Oliver Joyce and Brendan Irvine but there was a shock defeat for defending women's lightweight champion Katie Taylor, who suffered her first defeat in five years and must now wait to confirm her spot.

Rebekah Tiler, 17, won three bronzes in the 69kg division, 19-year-old Mercy Brown took two bronzes in the 75kg class and Zoe Smith, 21, took clean-and-jerk bronze in the 63kg, although she described her performance as "disappointingly lacklustre".

British record-holder Jack Oliver suffered a suspected dislocated elbow in the men's 77kg and must now wait to see whether the injury will rule him out of selection for Rio.

Great Britain have now earned one quota place in both the men's and women's weightlifting in Rio, with names set to be determined at the British Championships in June. 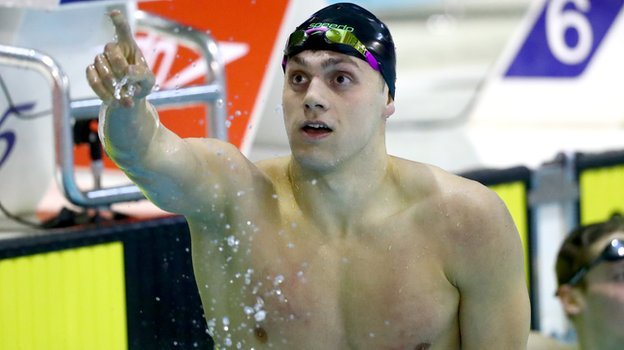 Swimming: Just eight British swimmers achieved the tough qualifying criteria at the British Championships to book their place in the squad for Rio.

They will be joined in Rio by Andrew Willis, who was a surprise winner in the 200m breaststroke, and 400m individual medley champion Max Litchfield.

The selectors will name a squad with a maximum of 30 swimmers later this week, with the likes of Fran Halsall and Ross Murdoch having to wait to see if they will be included.

Great Britain head coach Bill Furniss defended the tough qualifying criteria, saying that "it sorts out the wheat from the chaff".

The Olympic bronze medallist earned his first individual medal of the year, a bronze, and also teamed up with 19-year-old Dan Goodfellow for silver in the 10m synchronised event.

Tonia Couch and Lois Toulson won their third medal of 2016 with bronze in the women's synchronised 10m platform.

Last week, all four were among the 14 divers named in the GB squad for next month's European Aquatics Championships in London. 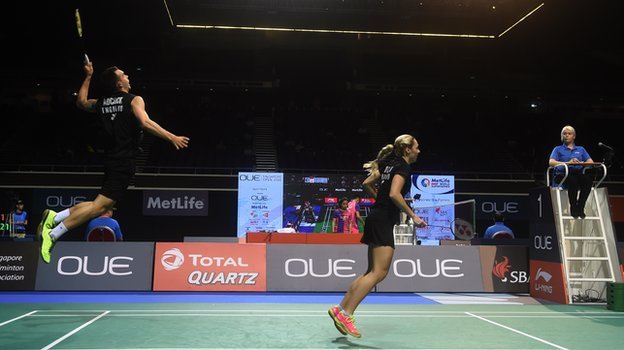 The Adcocks were competing for the third week in a row

BMX cycling: Liam Phillips and Kyle Evans have been selected to represent Great Britain  at next month's World Championships in Medellin, Colombia.

Equestrian - dressage: Charlotte Dujardin and Carl Hester were in winning form in Keysoe, the first international competition on home soil this season. Dujardin came first on Barolo, with Hester second on Wanadoo.

Equestrian - jumping: Scott Brash and Hello Forever won both the Massimo Dutti Trophy and the Banorte Trophy in Mexico City. Meanwhile, John Whitaker moved up to second in the overall standings on the Global Champions Tour after finishing sixth in the Grand Prix on Argento.

Football: The draw for the Olympic men's and women's football events has been made.  Defending men's champions Mexico have been put in the same group as world champions Germany.

Fencing: Great Britain failed to qualify any individual fencers at the Europe Olympic Qualifier in Prague. Britain have already qualified in the men's foil but had been hoping to earn places in the other events.

Golf: Trained handlers will be present during the Olympic golf competition in Rio to keep alligators off the course.

Gymnastics: Louis Smith has apologised for his comments about the judging at the recent British Championships and received a warning from British Gymnastics about his conduct.

Dipa Karmakar has become the first female Indian gymnast to qualify for the Olympics.

Modern pentathlon: Great Britain's Jamie Cooke won the World Cup event in Hungary. It is the third gold of his career, and the first World Cup medal of the season for Great Britain. 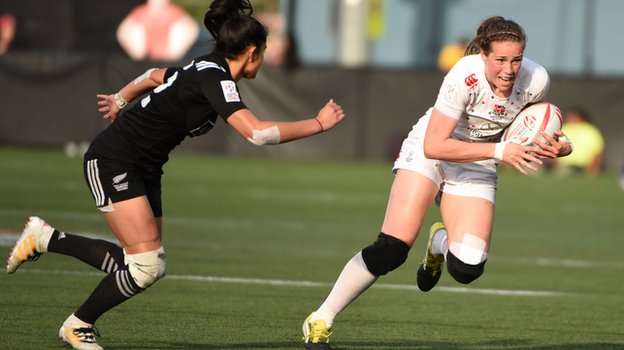 Rugby Sevens: Kenya shocked Fiji in the final in Singapore to win their first men's World Series title. However, Fiji extended their overall lead at the top to eight points over South Africa with two rounds remaining.

The women's World Series was in Langford, Canada, where England won their first tournament of the campaign,  beating New Zealand in the final. Australia had won the previous three tournaments this season but lost to England in the semi-finals.

Sailing: John Pink and Stuart Bithell claimed their first podium finish of the year  with bronze at the 49er European Championships in Barcelona. Their rivals for the solitary British Olympic place, Dylan Fletcher-Scott and Alain Sign, were 15th.

Charlotte Dobson and Sophie Ainsworth, who have already secured their place in the British team for Rio, were seventh in the 49erFX.

Table tennis: Paul Drinkhall and Liam Pitchford failed in their attempts to gain Olympic spots  at the European Qualifying tournament in Halmstad, Sweden. Both must now hope their world rankings will be enough to earn them a spot in Rio.

Meanwhile, 15-year-old Kanak Jha of the United States became the youngest male table tennis player to qualify for the Olympic Games. Jha will become the first US Olympian to be born in the 21st century.