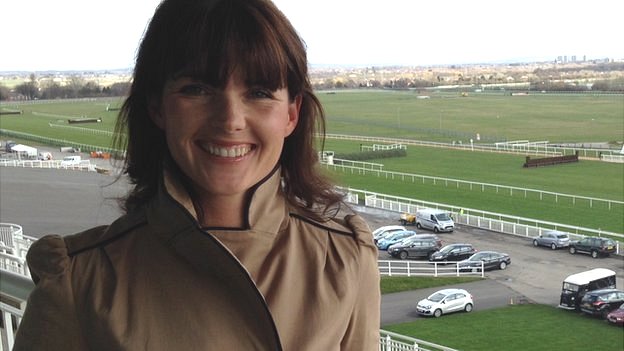 Katie Walsh rode two winners at the Cheltenham Festival in 2010

Katie Walsh was 12 metres away from becoming the first female jockey to win the Grand National at Aintree.

She might still do it, though would need a late call-up ahead of next month's race to have a chance this year.

"I thought I was going to win - just me, just Katie, not the first woman, just Katie Walsh," she says of her historic third-placed finish on Seabass in 2012.

Here, she gives her thoughts on whether a woman can still land the big prize, competing against the men and the day she led in a National winner, trained by her father Ted with her brother Ruby in the saddle.

'The day I nearly won the National'

On Saturday 11 April, the 168th Grand National will be run. A race over 30 fences, nearly four-and-a-half miles, with £1m in prize money and an estimated global audience of 600 million.

Three years ago, Neptune Collonges won by a nose from Sunnyhillboy, with Seabass five lengths back in third, the best finish by a female rider.

"I look back now, sometimes you think 'If I'd done this, or done that' - no one has watched that DVD more than me. I've probably seen it 100 times," says the 30-year-old Irish rider.

"It definitely came to a point where I thought I was going to win, and I don't usually say that in a race. Usually when you do say it, you do win.

"It was amazing to have that feeling just as we turned in, or at the back of the third last fence, thinking 'I'm going really well here - I wouldn't swap mine for anything else'.

Walsh's near-miss had echoes of the film National Velvet where Elizabeth Taylor played a young female jockey who won the Grand National.

Did you think about history?

"No. Definitely part of it was I'm going to win the National - just me, just Katie, not the first woman, just Katie Walsh," she calmly insists.

Did you feel the pressure?

"No. I would never have gotten pressure from home. There was definitely a bit more of a buzz - he was fancied and I think he went off favourite (he was 8-1 joint favourite) on the day.

"He had the right profile and a nice weight - he was the horse everyone wanted to ride, and he was mine.

"It was a great couple of months - the lead-up to it. I'd ridden two winners at Cheltenham - it wasn't the first time I was ever going to be on the big stage. I was able to handle it. I was definitely at the right age to take it."

Walsh won at the Cheltenham Festival on Thousand Stars in 2010

Katie Walsh was still at school when, aged 15, she led Papillon into the winner's enclosure after the 2000 Grand National.

"That was definitely one of the high moments for the Walsh household. I rode him out here and looked after him. There was great hype and excitement, and I led him up on the day, sure the rest is history," she recalls.

"I think it's easier to ride it than watch it. The constant roar and no one seems to know what's going on. You need to get the first couple of fences out of the way and then see what's happening.

"That was a fantastic day, very emotional and the ultimate dream come true. I travelled home on the ferry that night with the horse and arrived back into Kill (family home in Kildare) early on the Sunday morning.

"There was cars everywhere and people and news trucks. It was mad. It was a huge celebration - I think it was Tuesday before anyone came up for air."

So can a female jockey win the race?

"I would love to ride in another National. I was third and it was brilliant. I'd love to win a National - who wouldn't? I think it will happen. I hope it does happen," says Walsh.

Much will be down to fortune, having the backing of trainer and owners - and of course, the right mount.

"Trying to get the right combination of everything - it's like baking a cake, isn't it?" observes the amateur jockey.

"But the female's ability isn't the problem. It's to get the horse, and the association for it to happen."

Racing is one of the few sports where elite men and women compete against each other.

"It's fantastic that women can take on the men at the same level," said Walsh, an ambassador for Aintree, which is holding a Grand Women's Summit on Ladies' Day, 10 April, to bring females from the sport together.

"I can go down to the start and ride with the likes of Ruby, Tony McCoy and take them on. There's no other sport that does that really, I don't think.

"There are a lot of women involved in the sport and in the business from the media side to making the National happen on the day, the vets, stewards, doctors."

But are they as good?

"I think I'm good value at my weight at 9st 10lb, which is a nice low riding weight.

"I'm not physically as strong, but I knew Seabass better than anybody. On that day for the job to be done, I was well capable of doing it. I don't think if anyone else had ridden him that day, he would have finished any closer."

What about the future?

"I've had a very good season and rode the winner of a Kerry National and Thousand Stars won a big race in France. I'm not just quite ready to hang up my boots," says Walsh, who married trainer Ross O'Sullivan in 2013.

But when asked about the possibility of children, she replies: "I'd say as soon as I begin to start a family, the boots will definitely be hanging up."

And this year's Grand National?

The 19-time champion jockey McCoy has yet to choose from two potential rides in his final National before retirement, and Walsh believes he has leading claims.

"I went for Cause Of Causes as my pick on the day the Aintree weights were published in London in February. He has the profile and experience. You need to be classy to win a National. You can't just be a good jumper, and want four-and-a-half miles.

"You need the ability to win over two-and-a-half. For me, you need to be travelling for the first mile and a half and then get into a rhythm after that. Cause Of Causes has that for me, and so does Shutthefrontdoor."

While Walsh - who has completed the course in the last three runnings - has no ride booked at this stage, she was called in on the morning of last year's race by trainer Willie Mullins to partner Vesper Bell (13th) after jockey Mikey Fogarty was injured.

"I would be ready and waiting, stick in hand. That's racing. It's not ideally how you'd like to be getting a ride, but you'll take it. It's nice that someone would think of you," she concluded.