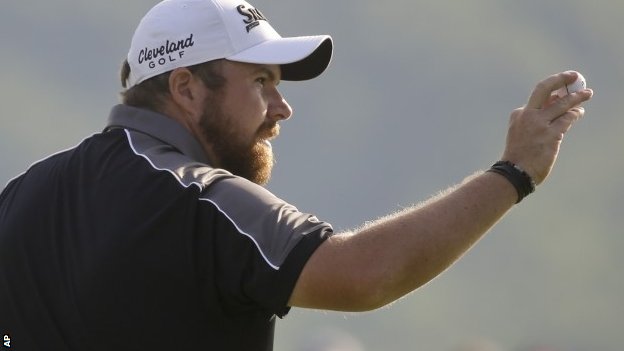 Lowry is attempting to win his first major

US Open 2016: Shane Lowry leads from Johnson, Westwood and Garcia

Ireland's Shane Lowry takes a four-shot lead into the final round of the US Open after completing his third round in a five-under-par 65 on Sunday.

Lowry leads on seven under at Oakmont, with American pair Dustin Johnson (71) and Andrew Landry (70) tied for second.

England's Lee Westwood is on two under after parring his final three holes.

Sergio Garcia returned with five holes remaining but had two bogeys to drop back to level par, while world number one Jason Day is one over.

Australian Day completed his third round, a four-under-par 66, before darkness halted play on Saturday with the leaders still out on the course.

At that stage, Lowry led by two on five under with four holes to play. He returned to play them on Sunday in two under par to equal the lowest round of the week and match the lowest 54-hole score at Oakmont.

He picked up birdies on the 15th and 17th holes, the latter after an excellent chip to nine feet from heavy rough.

"I would have taken four pars and gone home for a little rest, " said Lowry, who is world number 41, the same as Angel Cabrera when he won the US Open at Oakmont in 2007.

"It was a really good morning's work and that was one of the best rounds of my career.

"I've never felt so comfortable on a course in my life. I'm not sure it's going to be the same story on the first tee this afternoon but I've worked hard to get here."

None of the top eight on the leaderboard, who are the only players at par or better after three rounds, have won one of golf's four majors.

Johnson, who had a birdie on the 15th to get to three under, came close to winning this title last year but three-putted the final hole to hand victory to Jordan Spieth.

Landry, who bogeyed the 14th and 15th holes to drop back to one under, hit back with a tap-in birdie on the short par-four 17th before rolling in a 45-foot putt on the last to get back to three under as he seeks to win on his first appearance in a major.

Westwood, 43, has had nine top-three finishes in a major without winning one. Should he be successful on Sunday, he will set the record for most majors played before winning one, breaking Tom Kite's run of 72 before he won the 1992 US Open.

Live text commentary of the final round will begin at 16:00 BST on the BBC Sport website, with Radio 5 live Sports Extra coverage starting at 20:00.