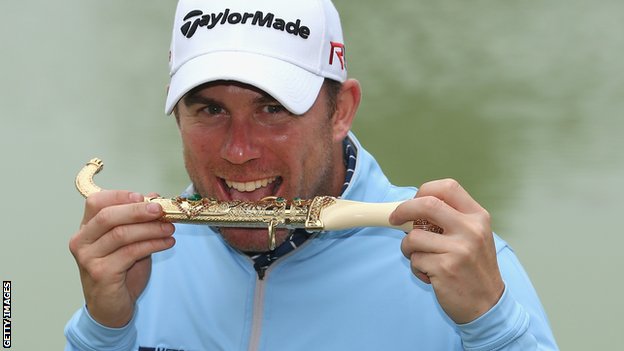 Richie Ramsay admitted he was overcome with emotion as he put injury problems behind him to win his first European Tour event in three years.

The 31-year-old Scot recovered from dropping four shots in two holes in his final round to win the Trophee Hassan II in Morocco.

"I am pretty overwhelmed," he told BBC Sport. "It was obviously a rollercoaster day.

"It has been a long time coming as I've had a few injuries."

Ramsay, whose victory lifts him 51 places in the world rankings to 77, won the 2010 South African Open and the European Masters two years later.

But, in the last two seasons, he has been held back by neck, hip, ankle and shoulder injuries.

And this year he had made early exits in four of his five tournaments as well as withdrawing from the Dubai Desert Classic through illness.

This time, he thanked his physiotherapists at home and on the European Tour for helping him make it through all four rounds at Golf du Palais Royal.

"Saturday morning, I was struggling a bit," said Ramsay while revealing a rekindled romance with the sport.

"I just had so much fun out there. Coming down the last, all I could think of was hitting a good shot.

"Mentally, it was brilliant. I saw each shot and just went to execute it.

"That's what I love to do and you're not going to be able to take the grin off my face for a while."

Aberdeen's Richie Ramsay has been a European Tour member since 2009

He ended it one stroke ahead of Wattel despite a triple-bogey six on the front nine in a closing 69, while McArthur fell back with a 77.

"I knew the back nine was scoreable and I've been around enough to know what you have to do," said Ramsay when asked how he managed to recover after relinquishing the lead.

"You have to trick your brain into thinking that everything's going pretty well and that's what I did.

"There's lots of different stuff we chat about and it keeps my mind off it and when I'm hitting the golf shot I'm very focused."