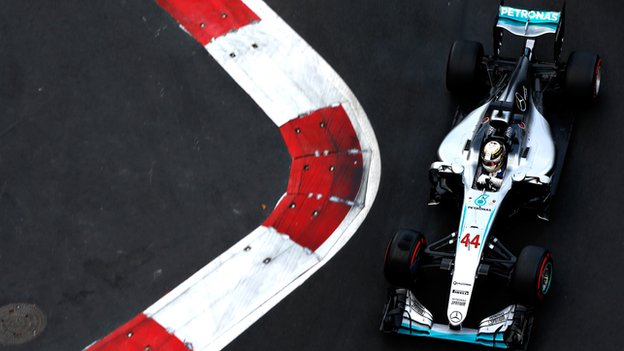 Defending champion Lewis Hamilton says the technical problems afflicting him are making him fear for his hopes of winning a fourth world title.

The Englishman is 24 points adrift of Mercedes team-mate Nico Rosberg after finishing fifth in the Grand Prix of Europe, which the German won.

"I am definitely not feeling confident for the future, but I have a lot of races ahead," said Hamilton.

"It's looking like a good year for Nico, but I never give up."

Hamilton arrived in Baku having cut Rosberg's lead from 43 points to nine with two victories.

But he made life difficult for himself on F1's newest track with a mistake-ridden performance in qualifying, which left him 10th on the grid.

His race was then hampered by a problem with the car's engine settings, which the team could not tell him how to change because of restrictions on help drivers can be given over team radio.

"I am just glad I got some points and am hoping from now on I will have some better races," said Hamilton.

"But I have been hoping that for some time and still have these engine problems here and there so we have work to do."

The team said they had programmed one of the engine's modes incorrectly, so it was giving less power when it was intended to give more.

The same problem afflicted Rosberg in the race, but he was able to change out of it faster than Hamilton.

That's because he had changed the setting himself during the race.

When that change subsequently caused a drop in power, it was a relatively simple leap of understanding to change it back again.

By contrast, Hamilton had been in the mode from the start of the race because he was going to have to pass people.

When he noticed a problem first occur on lap four, it took a while for the team to work out what it was and it was not obvious to Hamilton what to do.

He said he felt the team radio rules should be revisited.

"It was dangerous," he said. "Just looking at my steering wheel a large proportion of the lap, all the way down the straight just looking at my wheel and all they can tell me is it's a wrong switch position.

"So I am looking at every single switch thinking: 'Am I being an idiot here? Have I done something wrong?' And I hadn't.

"The radio ban was supposed to stop driver aids and this wasn't a driver aid it was a technical issue.

"To have that many switch positions it is something you should be able to rectify because everyone can see it in the garage.

"It would have added to the spectacle if I had had full power. I would have been more in the race."

Asked if he felt F1 should be "less computer and more man", he said: "Definitely. But it isn't and it won't be so there is no point talking about it.

"It is what it is. Maybe the rule needs to be looked at again."