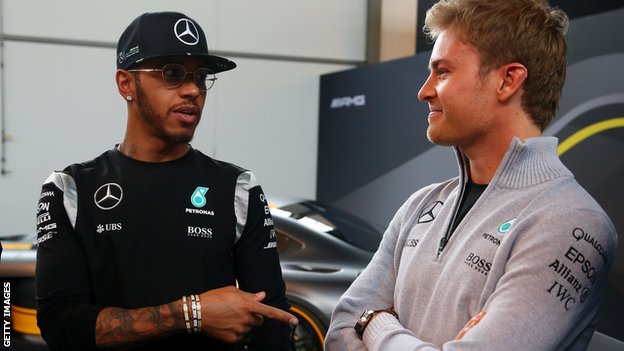 Lewis Hamilton spent much of the Chinese Grand Prix weekend saying how much he liked a fight. Well, he is certainly in one now.

Three races into the 2016 Formula 1 season, the British world champion is staring at a 36-point deficit to Nico Rosberg in the championship, after finishing seventh in Shanghai while his Mercedes team-mate continued his clean sweep of the races so far.

There is, as German Rosberg pointed out after the race, a long way to go yet in the longest F1 season in history - 18 further races, to be precise. But coming back from here will not be easy, even for arguably the fastest driver in the world.

China was always going to be a case of damage limitation for Hamilton from the moment he learned some days before the race weekend that he was facing a five-place grid penalty because his team felt the need to change a damaged gearbox.

That task got a whole lot harder when his car developed an engine problem in qualifying, consigning him to a start at the back of the grid.

Befitting a sequence of events that has seemed to only go from bad to worse for Hamilton so far in 2016, the 31-year-old was then hit by Sauber's Felipe Nasr at the first corner.

The impact broke Hamilton's front wing, which damaged the floor and other aerodynamic parts, costing him a chunk of performance in lost aerodynamic downforce, which in turn meant his tyres wore out more quickly. All of which made his fightback through the field harder than it would otherwise have been.

Mercedes's strategy programmes predicted a fourth place, or perhaps even a podium, would have been possible given a trouble-free race.

As it was, Hamilton's comeback was less effective than those of Ferrari drivers Sebastian Vettel and Kimi Raikkonen and Red Bull's Daniel Ricciardo, who also had messy starts to the race but drove superbly thereafter.

Vettel, 15th at the restart having changed tyres and his damaged front wing under the safety car that was sent out while the track was cleared of debris, fought back to second.

Ricciardo - 17th following the puncture that deprived him of the lead - made it to fourth, and Raikkonen - 20th at the restart and one place ahead of Hamilton - to fifth; both overtaking the Briton in the closing laps as he struggled unsuccessfully to pass Felipe Massa's Williams.

The upshot of that is that Hamilton now faces a larger deficit to Rosberg than ever before, even compared to his bumpy route to the 2014 title, when he was 29 points adrift with just seven races to go.

It's not all bad though

Hamilton was understandably not especially happy after Sunday's race. But the equanimity with which he had started the weekend remained. And there was a pleasant surprise for him in his news conference, too.

"It was a pretty horrifying race," he said, as he reflected on his misfortune. "There were some good experiences - I went around the outside of someone in Turn Seven and someone else in Turn Eight. I like that. But… how many points is it? 50?"

After he was told the deficit, he added: "OK, that's not as bad as I thought. I feel pretty good right now."

Hamilton said his current situation felt "perhaps worse now" than 2014 "because it has gone one negative after the other".

But that's emotion talking. When he reflects on his situation, he can - and almost certainly will - console himself with the thought that while the gap might be bigger than it ever was in 2014, two years ago he had to overhaul gaps of 25 points or more a total of three times.

And while Hamilton might have "no more jokers", as he put it, statistically it is inevitable that some bad luck has to afflict Rosberg sooner or later.

Lewis Hamilton has had some bad luck, including in the Bahrain Grand Prix where Valtteri Bottas collided with him at the first corner

Equally, it is not as if Hamilton has suddenly lost any pace. He was on pole for the first two races.

He lost potential wins in Australia and Bahrain because of two difficult starts. But even these have been overplayed by those who wonder aloud following Rosberg's run of wins whether the momentum has decisively and permanently shifted.

The facts are that Hamilton's start in Australia was within what the engineers call the "scatter" to be expected of a normal getaway as a result of new rules that have reduced the help drivers get from systems and were designed to provide variability.

It was marginally worse than Rosberg's but they were still disputing position behind the fast-starting Ferraris at the first corner, and it was only the inadvertent nudge Hamilton got from his team-mate that pushed him out wide and cost him a chunk of positions that took him out of the fight for victory.

In Bahrain, the German was clearly quicker off the line. But this was as a result of Hamilton having a problem getting the car to settle on the correct "wait revs" for the best start. That delayed his reaction to the lights, but once the car was moving the start was a good one.

And no-one could blame him for the unfortunate sequence of events that befell him in China.

"I had a good start today, finally," Hamilton said on Sunday. "Trust it to happen when I'm dead last. But that's something positive to take into the next race."

Lewis Hamilton: "I don't feel the dark cloud I have had in the past over me"

Hamilton has reacted to this sequences of results with an equanimity even he admits he would not have managed a few years ago.

"I don't feel the dark cloud I have had in the past over me," he said after the race in Shanghai. "Of course it is a trying time and lots of different emotions are going through my mind, as you see a season start the wrong way, and you see a championship you were focused on as your goal move further away as you're approaching it - but this is a part of motor racing and a part of the journey.

"Go away, come back and if we fail this weekend we will get up and try harder next time."

Rosberg, too, is aware there is, as the cliche goes, an awfully long way to go - 36 points, after all, is a very small percentage of the 450 that are still available this season.

"That's a race and a bit and he's as focused and motivated as ever," Rosberg said. "Lewis will never give up and he's the benchmark. He's been the benchmark for the last years so the battle is going to be big as always."

Meanwhile, if the first three races have been bad for Hamilton, they have been good for F1 in general - it has added to the tension and sense of competition that was lacking in 2015 as Hamilton ran away with it from the start.

It would help Hamilton's cause if the Ferrari drivers could get amongst the Mercedes and start taking points off Rosberg, but this is not happening so far.

For all that the red cars are closer to the silver than they were last year - and for all Mercedes' constant refrain that they are "definitely a threat" - there have so far been only flashes of evidence that Ferrari can get properly on terms with the world champions.

It is hard to draw definitive conclusions because of the way the first three races have unfolded, but the one thing that can be said with certainty is that the Mercedes remains the fastest car and Ferrari still have work to do to catch them.

Mercedes believe Ferrari are protecting a fragility in their engine that is preventing them running it as hard as they might like.

There is hard evidence for that in the the turbo failure and engine blow-up that ended the races of Raikkonen and Vettel in Australia and Bahrain.

And it is showing up on the GPS data to which all teams have access.

"What we have seen from them is they have gone a little bit conservative on the engine compared to Bahrain and it is just a matter of time when they find back to their form," Mercedes F1 boss Toto Wolff said.

What is clear is that the pressure is mounting on the team to finally end what is now nearly a decade of under-achievement.

Ferrari president Sergio Marchionne was in Shanghai and he gave interviews before the race.

"We need to fix this now," he said. "The team are on the clock. They know they need to start winning some races and bring them home.

"The team has developed a car at this point to the level we expected. We didn't expect to be on Mercedes' pace but I think the car will develop to the point where there is no discernible difference."

Marchionne's no-nonsense approach - and predilection for knitwear rather than business suits - has earned him the nickname the "jumpered assassin" in the road-car world.

The strong impression was that excuses will no longer be good enough if Ferrari don't start delivering soon.