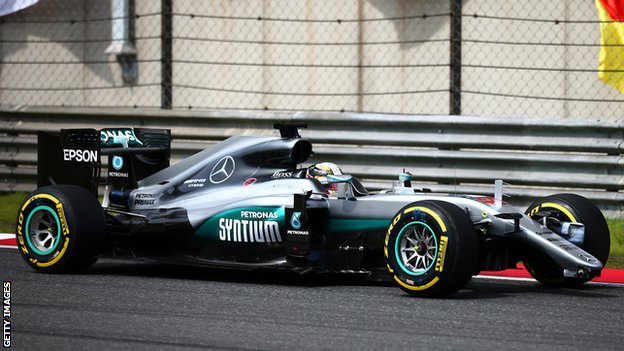 Lewis Hamilton 'has no more jokers available' after Chinese GP

Lewis Hamilton says he cannot afford any more bad luck if he is to beat Mercedes team-mate Nico Rosberg to the world title this season.

The German, who finished runner-up to Hamilton last year, is 36 points ahead after winning the Chinese Grand Prix.

Hamilton, who was seventh in Shanghai, said: "There is a long way to go, but I've no more jokers available."

Rosberg has now won the first three races - and no driver has failed to win the championship from this position.

He said the "dark cloud" that has hung over him in the past was no longer around, insisting: "We will get up and try harder next time."

He also told reporters he had expected to be further adrift of Rosberg after Shanghai.

Hamilton recovered from a 29-point deficit in 2014 to win the title but has had a troubled start to the current campaign.

"Of course it is a trying time and lots of different emotions are going through my mind," he said.

"But this is a part of motor racing and a part of the journey.

"I haven't got an amazing feeling, but I have the utmost confidence in this team and we will recover from this at some point.

"When? Who knows, but hoping for better races to come."

Hamilton started at the back of the grid in China.

He was already due to serve a five-place grid penalty for a gearbox change before his engine expired in qualifying.

Still, he insisted there were lots of positives to take from the race, including a "good start" and "great overtaking".

Rosberg insisted he was taking nothing for granted.

"It's too early to make any summaries," he said.

"It's three races now and they've gone really well for me, but it's the longest season in F1 history with 21 races so that's 18 to go.

"Of course I'm happy with the way it's gone. I'm feeling good and the car's there, but I don't want to say more than that.

"Lewis is not many points behind. He will never give up and he's the benchmark. He's been the benchmark for the last years, so the battle is going to be a big battle as always."