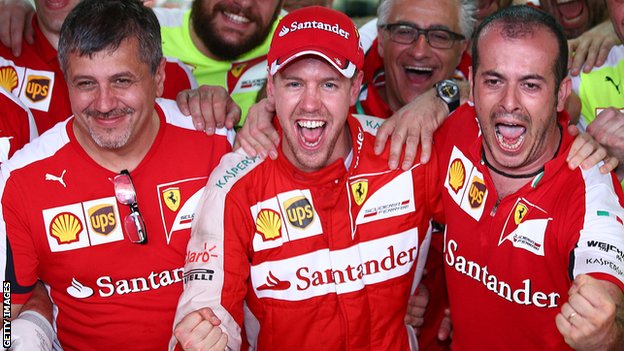 Sebastian Vettel's victory in the Malaysian Grand Prix came out of the blue, but it was a very welcome surprise.

No-one would have predicted it, apart perhaps from Ferrari.

Regardless of how strong Ferrari looked on their long runs during Friday practice, a victory just didn't seem possible with Lewis Hamilton's Mercedes on pole.

But the race unfolded exactly as Ferrari would have hoped.

The key thing was the strategic decision not to pit under the safety car. That transformed the race from something Ferrari were chasing to one they were controlling.

There are some great brand names in F1 but I have a sense that it means more to more people when Ferrari win, especially after a difficult time, than another brand or even a star driver.

I don't personally bow down to Maranello, but so many people do. It has to be the most recognised car brand in the world, from heads of state to people in villages in the middle of Africa.

Ferrari evokes passion, and Vettel has handled the whole transition from last year to this very well.

In his final year at Red Bull, he looked unhappy, even a bit spoiled, giving the impression that he was only happy when he was at the front.

When he was winning all those races for Red Bull, a lot of people said it was the car, but whatever your position on that, the bottom line was the style and manner in which he was doing it. He was a class act, and Malaysia was another classic Vettel performance.

It was great to see the emotion in Ferrari technical director James Allison after the race. He's quite a reserved person, but he was bursting with pride and he spoke fantastically well in his BBC television interview.

Allison said, quite rightly, that working in F1 and motor racing is mainly misery and when you look at the history of the great teams, such as McLaren Red Bull and Ferrari, you can see what he means. They win 25% of their races.

So you are losing 75% of the time, and that's if you are one of the successful teams. That's quite a statistic - you wouldn't want it if you were a boxer, that's for sure.

It was wonderful to hear Allison describe the emotion of this victory but then go on to say 'well, look, we knew our strategy, we knew our tyre wear, we weren't going to panic into reacting to an early safety car'.

It is so easy when you're looking at your strategy to overlook a scenario such as that, because historically there have not been early safety cars in Malaysia. And you can get caught out by complacency.

In Mercedes' position, you have to be conservative because you will only get criticised for being overly aggressive and looking a bit cocky. The flip side is that you risk having your pants pulled down and then of course you end up in second place by not being as brave as Ferrari were. They trusted in their driver and went with it.

Mercedes have to respond to this new-found speed from Ferrari but I think they can because I think they still have the underlying pace.

It puts them in a different situation and it takes their focus away from the internal Lewis Hamilton v Nico Rosberg battle, to an external one of Hamilton v Vettel, who is now second in the championship, only three points behind Hamilton.

It's very early but if that trend continues then we have a fight on our hands this season. And although he has been unlucky in the first couple of races, Vettel's team-mate Kimi Raikkonen has the pace to get in the mix as well.

Mercedes: Battle is on with Ferrari

Rosberg is showing signs of having taken a little step back over the winter. We know he has great speed and talent but his confidence seems to have been knocked a little bit.

He was hesitant in his overtaking manoeuvres, not for the first time. And during the race he was asking lots of questions about what was going on outside the car. It seems to me he should keep his focus in the car, on the here and now.

I am curious to see how Ferrari get on in the next few races.

Malaysia is a very demanding circuit that tests many of the aspects of a grand prix car's capabilities, whether it be traction, braking or long-duration corners, both high and low speed. That suggests the Ferrari should be quick in most places.

China has slightly longer corners than Malaysia but it is not that different a circuit, other than much lower track temperatures, so I would expect them to be able to carry this performance into China.

Elsewhere, there was a great performance from Toro Rosso to beat their senior team Red Bull.

Verstappen's racing skills were particularly impressive on Sunday - he knew when to hold back, when to attack. That was unlike Marcus Ericsson in the Sauber, who pulled a couple of good passes and then thew it off the track.

Verstappen and Sainz have already proved they are in F1 on merit, and even though Red Bull had a disappointing race result, it was a better weekend from them in general after the troubles of Australia.

It does, though, look like being a long season for them.

The same goes for McLaren-Honda. They made a marked step forward in Malaysia but being pleased to be able to fight with the other cars at the back of the midfield is a long way from where they expect to be.

It is no surprise that a lot of people are looking at Fernando Alonso, who left Ferrari at the end of last season to join McLaren, and wondering what he must be thinking given McLaren's struggles and Vettel's win. But I think he is over it.

Alonso has made his bed. He says he's happy. He sees an upward trend at McLaren.

But the fact remains he has not fulfilled his talent in race results and particularly championship titles because of the career decisions he has made about which teams to join at particular times.

No matter what the rest of us think, it is Alonso himself who has to live with that.