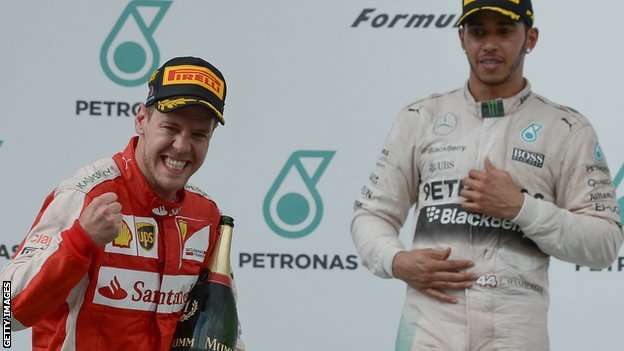 Hamilton, who was beaten into second place, said: "We were not expecting them to be as quick as they were. Vettel is up there with us."

Rosberg added: "Ferrari and Sebastian were the best today so they are a title contender - both Ferrari drivers."

Vettel said he needed to wait before concluding he could mount a challenge.

The German, who moved to Ferrari from Red Bull for this season, said the intense heat in Malaysia had weakened Mercedes and made Ferrari able to challenge them.

"They probably struggled a little more with the heat than they expected and we didn't struggle as much as we expected," the four-time world champion said.

"When that pressure is released by a day like this, boy does it feel good" - Ferrari's James Allison

"It made us able to beat them fair and square. China [the next race] is a completely different track. We expect them to be strong - they are the ones who set the pace."

Ferrari technical director James Allison, who has masterminded the Italian team's turnaround following their worst season for 21 years in 2014, pointed out that Mercedes had dominated the first race of the season in Australia two weeks ago.

"We were better than we looked but even in free air we couldn't have held a candle to them in Melbourne," Allison said.

"There is a lot of work for us to do before we can come to a race weekend confident we can hunt for a victory from the first session of the weekend.

Mercedes: Battle is on with Ferrari

"But we do have an exciting development programme so it should be an interesting season to see if we can catch up and be genuine contenders at any weekend."

Allison rejoined Ferrari in September 2013, having held a more junior position during their dominant years with Michael Schumacher last decade.

"It feels good to win in any team but there is something absolutely fantastic about this team," he said.

"Every team works hard. At Ferrari they work especially hard. They also have the history and tradition of the team bearing down on their shoulders.

"Anyone who works there in a period when it is not successful is sort of cowed by that fact.

"Those are pressures they soak up and when that pressure is released by a day like this, boy does it feel good."