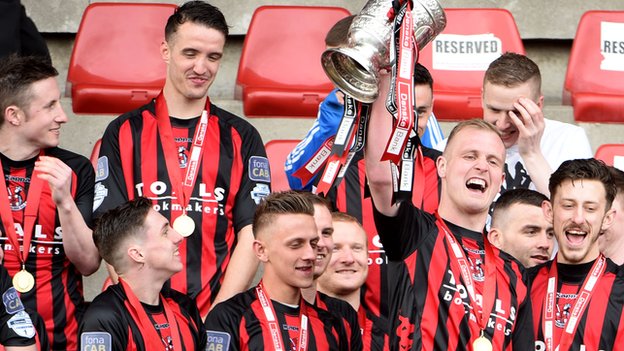 Crusaders will play FC Copenhagen in the second qualifying round of the Champions League next month.

The Irish Premiership champions will face the Danes at home on 12/13 July and away on 19/20 July.

Linfield have drawn Cork City in an all-Ireland derby in the first round of qualifying for the Europa League.

Irish Cup champions Glenavon will travel to Iceland to play KR Reykjavik and Cliftonville play FC Differdange of Luxembourg on 30 June and 7 July.

Home and away venues and dates have not yet been officially confirmed.

Steven Baxter's Crusaders could have been the first competitive opponents for new Celtic manager Brendan Rodgers, but avoided each other in the draw with Celtic facing either Flora Tallinn or Lincoln of Gibraltar.

League of Ireland champions Dundalk have been drawn against FH Harnarfjordur of Iceland.