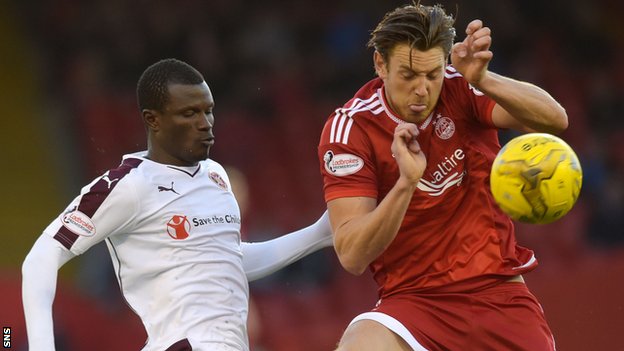 Aberdeen will face CS Fola Esch of Luxembourg in the Europa League first qualifying round, while Hearts will play Estonian outfit FC Infonet.

Scottish Cup winners Hibernian will meet Valur Reykjavik or Danish side Brondby in the second qualifying round.

If Aberdeen progress they will take on Lithuanian side FK Ventspils or Vikingur from the Faroe Islands.

Waiting for Hearts would be Birkirkara of Malta or NK Siroki Brijeg, the Bosnian team they beat in 2006.

The Dons, who finished runners-up to Scottish champions Celtic, are due to be at home in the first round first leg on 30 June. Hearts, who finished third, will travel to Tallinn on the same day, with the second legs on 7 July.

The second-round games are due to be played over 14 and 21 July.

The draw has Aberdeen and Hibs at home first in those games if they qualify, with Hearts away.

All three Scottish sides would then have a third qualifying round and a play-off round to negotiate to reach the group stages which begin in September.

The Dons missed out on the group stages last season, losing their third-round qualifier for a second year in a row.

They were drawn out first in Monday's draw but Irish side St Patrick's are also due to be in Esch-sur-Alzette for their away leg on 7 July, after drawing another Luxembourg side Jeunesse Esch, which might lead to rescheduling of one or other of the fixtures.

Hearts lost at the Europa League play-off phase in 2012, with Hibs exiting in the second qualifying round the following year.