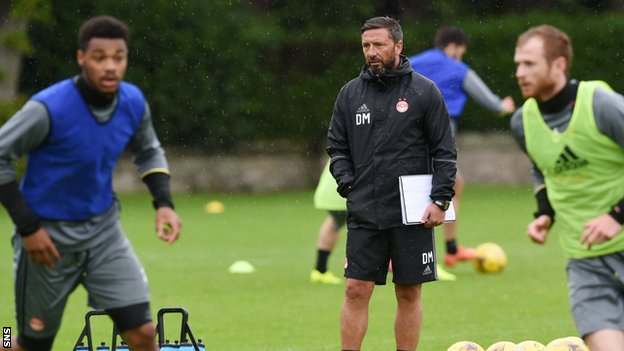 Aberdeen manager Derek McInnes hopes to add more attacking players to his squad, but admits it may not happen before their Europa League qualifying campaign begins.

McInnes has signed two goalkeepers, a defender and two forwards and the Dons' first qualifier will be on 30 June.

"Whether that can be done before the Europa League game, I don't think that'll be the case."

"As much as you like to get all your signings, we'll have to wait and be patient with one or two," McInnes told BBC Scotland.

Lewis and Alexander trained with their new team-mates this week

"We're going to have to hold our nerve and try and bring in good ones. The English clubs aren't back for the first week in July a lot of the time.

"We'll keep looking. We're looking for maybe another player that can play off the side in the wider area. We might still bring another different type of forward player as well and maybe another midfield option.

"I've said all along we felt that it's important we bring a bit more size and presence to deal with certain opponents better.

"Pace is a big part of our team. If we can add pace and strength to the side, to the ones we've already got then I'd be happy going into the season proper in August."

Asked about potential interest in Aberdeen wide men Jonny Hayes and Niall McGinn, McInnes replied: "We're not going to just roll over for teams because they like our players.

"I'm sure there's a lot of teams like our players.

"Whoever comes asking about our players will have to come loaded with a significant of money because we're trying to build something. We're trying to bring players to add to the good players we've got."

McGinn scored Northern Ireland's second in their 2-0 Euro 2016 Group C win over Ukraine and progress for Michael O'Neill's side may mean the 28-year-old is not available for Aberdeen's first Europa League qualifier.

"It's a bit of a dilemma for us, that one," added McInnes. "We want Niall to do well and he certainly did that. It was a lovely finish the other night."