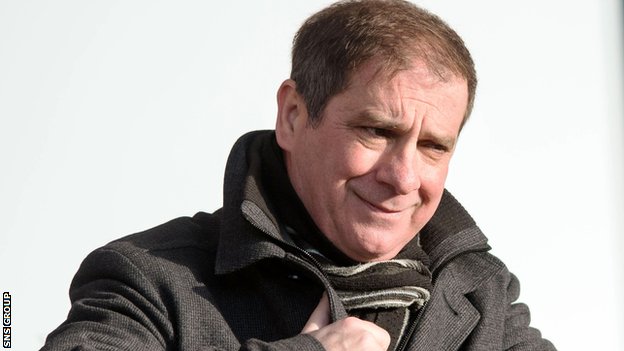 St Mirren can be champions of Scotland by 2019 - Tony Fitzpatrick

Chief executive Tony Fitzpatrick stands by his assertion that St Mirren can be champions of Scotland by 2019.

The Paisley side were relegated from the top flight in 2015 and finished last season sixth in the Championship.

But Fitzpatrick is enthused by a fans' buyout, which should be completed this weekend.

"When you look at Leicester City [winning the English Premier League] I think everything is blown out of the water," Fitzpatrick told BBC Scotland.

St Mirren want 1000 fans to sign up by Sunday to pay £12 a month to help fund the takeover. They remain 40 short of that target.

But, with some fans contributing £25 a month, plus the backing of construction tycoon Gordon Scott - who is set to become club chairman - the deal appears all but finalised.

Fitzpatrick, 60, a former captain and manager at the Buddies, will stay on as chief executive, having taken up the position in January.

At the time of his appointment, he made the bold claim that St Mirren could rise to the top in Scotland.

"I believe it fully," he said when asked about his earlier prediction.

"Look at Leicester City. I also said Paul Lambert would be a million pound player many years ago and people laughed at me. He went on to become an £8m, £10m player. Why not? Why not have these ambitions?

"I know people sometimes laugh and think these are just words. No, it's not just words."

Fitzpatrick is hugely ambitious in terms of success on the pitch and swelling home crowds, remembering the impact former manager Sir Alex Ferguson in the 1970s.

"That potential is here in Paisley. We have to get back to engaging with supporters again."

St Mirren will start the new Championship season with a derby at home to Morton and Fitzpatrick says the initial focus is on returning to the top flight under manager Alex Rae.

"We have got a great management team here, we are starting to attract the right players," he said.

"I am really looking forward to it. The vision is to get back into that top league and have that 8,000-seater stadium packed out every home game."

On the fans' buyout, Fitzpatrick a Scottish Cup winner with St Mirren in 1987, added: "It has always been an ambition for myself to live to see the St Mirren community own St Mirren Football Club.

"Gordon Scott - who has put up quite a lot of money to buy the interest in the club - is going to be the main man, he will run the club.

"But he will pass it over to the supporters within 10 years.

"Gordon is a St Mirren supporter. He has been on the board before. We are sitting in this beautiful stadium - Gordon was behind building this. We are excited about the whole thing happening.

"It is nearly there. I think people are still a wee bit apprehensive. They are looking at it and saying, 'Is it sustainable?' Well, I am saying to you, yes it is.

"I know we need a thousand supporters, which we will get - I am 100% with that. It is a great opportunity for our supporters to own our football club. It is a dream come true for us all here in Paisley."