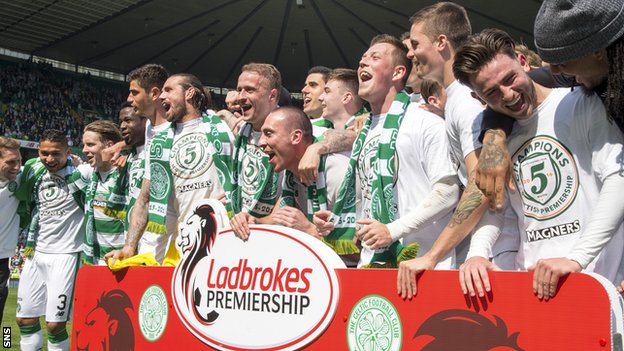 Celtic begin the defence of their Scottish Premiership title with a trip to Hearts on the weekend of 6 August.

The first Old Firm derby of the season, following Rangers' four-year absence from the top flight, is scheduled for 10 September at Celtic Park.

County and Caley Thistle meet again in the New Year fixtures, with Celtic travelling to Ibrox and Hearts taking on Aberdeen at Tynecastle.

There will be a winter break after the New Year games, with the action resuming on 28 January.

Celtic were scheduled to face Partick Thistle on 13 August but the champions will use an opt-out option for a friendly with Inter Milan to mark the 50th anniversary season of their 1967 European Cup triumph against the Italians.

The champions are aiming to win their sixth consecutive Scottish title, with Brendan Rodgers the man charged with maintaining their domestic success.

The former Liverpool boss was named as successor to Ronny Deila, who resigned at the end of the season after delivering two Premiership titles during his spell at the club but was undermined by failures in Europe.

Rangers secured their Premiership place by winning the Championship, their third promotion in four years.

Kilmarnock, at home to Motherwell on the opening weekend, retained their top-flight status by winning the play-off final against Falkirk.

Ross County manager Jim McIntyre: "It's exciting, the start of a season always is. It's a chance to get some points on the board but all the clubs will think that. On paper, the second quarter looks a little trickier so it'd be good to get points on the board early if we can."

Your team's fixtures in full

All fixtures and kick-off times are subject to change.

The BBC is not responsible for any changes that may be made.