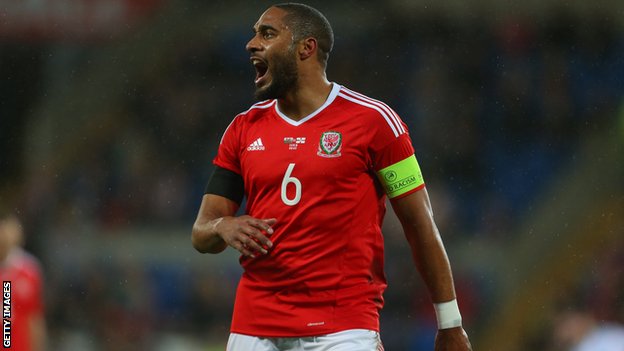 Ashley Williams has had two separate spells as captain of Wales

Euro 2016: Ashley Williams - Wales' English captain on his journey to the top

Ashley Williams grew up supporting England but will lead out Wales in Thursday's Euro 2016 'Battle of Britain' in the biggest game between two of football's oldest rivals.

But why the 31-year-old defender lines up wearing the Welsh dragon, not the Three Lions of England, is an extraordinary coincidence and thanks to the inquisitive detective skills of former Wales youth coach Brian Flynn.

"I was playing for Stockport County," Wolverhampton-born Williams recalled. "Luckily we had [Wales goalkeeper] Wayne Hennessey on loan, so Brian Flynn came to watch.

"He liked me during the game and recognised that I had a Welsh surname.

"Then Wales called Stockport to check if 'Williams' had any Welsh roots and they asked me and I said 'yes'.

"Then I got the call-up by the manager John Toshack."

Williams, the former Drayton Manor Park fairground worker, has certainly enjoyed a 'Roy of The Rovers' career from non-league part-timer at Hednesford Town to being one of the Premier League's best defenders and a League Cup-winning captain.

Former England captain Rio Ferdinand has wondered why a top club has not attempted to prise Williams from Swansea City and many pundits would argue that Wales' 'Mr Dependable' will be the finest defender on show in Thursday's crucial Group B fixture.

Williams acknowledges he dreamed of starring at a major tournament when he was growing up in the West Midlands - but envisaged it being with Wales' fiercest rivals and opponents on Thursday.

"I did grow up in England and followed the England football team," he told BBC Wales Sport.

"It is a bit strange for me, but I am the captain of Wales, all my loyalties lie with Wales and the football team.

"Wales was not on my radar - I can't say it was. I never imagined when I was growing up being at a major tournament as anything other than a fan.

"My grandad on my mother's side was Welsh and I am very grateful for that. It is all I have known for ages.

"Mum and dad are really proud. I have lived in Wales for nine years now and every time I play for Wales and the national anthem is played, my mother gets emotional.

"A few of my English friends now support Wales and then there are a few who support England who want tickets, but I have told them none of them can have tickets just to watch England!"

Williams wasn't just missed by England. He was also released by West Bromwich Albion as a 16-year-old and waited on tables before his big professional chance with Stockport.

John Toshack and Brian Flynn oversaw many debuts during their tenure with the Wales national side, including that of Ashley Williams

Within 48 hours of his Wales debut in Luxembourg in March 2008, Williams had signed for Swansea and was about to start a journey that would take him from League One to the Europa League and Euro 2016.

Leading Wales in their first major finals since the 1958 World Cup is among Williams' "proudest moments".

But his European Championship debut looked as if it would end prematurely as he started limping in the second half of Saturday's memorable win over Slovakia.

The Swans centre-back took a kick to the leg during the 2-1 victory in Bordeaux .

Williams finished the game but required treatment to ease swelling although he insists "it's fine" for Thursday's meeting with the land of his father.

Williams' appearance history suggests he, of all players, will proudly lead out his adopted nation in arguably the biggest game in their history in Lens.

For a start, no-one has played more Premier League games since Swansea's promotion in 2011 than Williams.

England goalkeeper Joe Hart is the only one that comes close.

And the man hailed as Wales' Mr Indestructible has missed just eight Wales games in eight years since his first cap 59 games ago - and only two of those absences were because of injury.

"I could never have imagined being in this position when I was down in the lower leagues," admitted Williams.

"I am looking forward to it massively. We have all worked so hard to get to this point."

And none work harder than the captain, Wales' own West Midlands warrior.