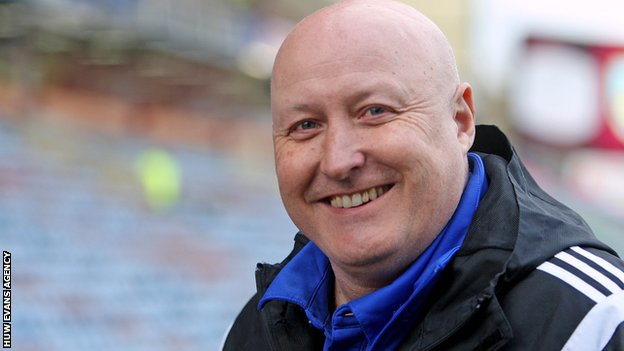 Russell Slade has never managed in the Premier League

Slade: Cardiff City need to win all their remaining games

Cardiff need to win all their remaining games in the Championship to reach the play-offs, according to manager Russell Slade.

The Bluebirds are five points behind Sheffield Wednesday in the race for sixth spot after their blank with QPR.

"We've said we have to match their (Wednesday's) result and we've done that," Slade said.

"We go to Brentford next and need a positive result and we probably need to win all four of our remaining games."

He continued: "In one way, we may see that as an opportunity where we lost two points. But we're still in there and fighting.

"It's a big ask but it's not impossible."

Slade was left fuming after Cardiff were denied a late penalty in their goalless draw with QPR.

Cardiff were denied what Slade claimed was an "obvious" penalty in the 86th minute when Anthony Pilkington went down under the challenge of Grant Hall.

Referee Stephen Martin waved away furious protests from the Cardiff players and afterwards Slade said: "I thought we thoroughly deserved to win.

"There was one great save, a couple of near-misses and an unbelievable penalty shout when he [Pilkington] was wrestled to the ground. It was incredible that we didn't get that.

"I don't usually moan because these decisions even themselves out over the season, but I get upset when you don't get such an obvious decision."

Jimmy Floyd Hasselbaink ended his playing career at Cardiff and has now steadied the ship at QPR who have lost just twice in their last 11 games.

He said: "We controlled the game in the first half and had a lot of possession but I would have liked to see far more penetration. We should have gone for it more and ended our attacks with a shot or a cross instead of keeping the ball for the sake of it.

"Cardiff didn't have a lot to say or couldn't get near to us but I'm not someone who just wants possession. We need to have a purpose and that could have been better.

"But we were dominant with the ball which is refreshing at such a tough place given Cardiff have only lost once at home."