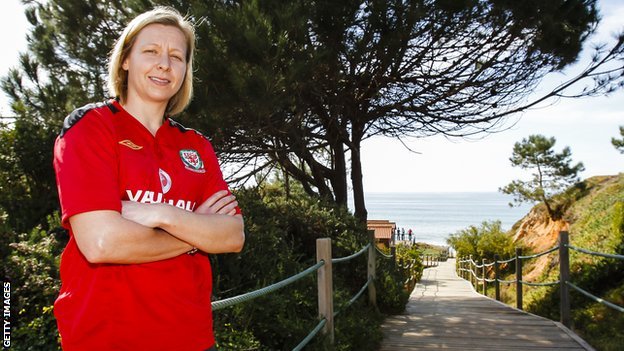 Euro 2017 qualifying: Wales have 'everything to play for' - Jayne Ludlow

Kayleigh Green and Helen Ward both scored twice as Wales won 4-0 in Shymkent to keep alive their qualification hopes.

"There's everything still to play for," Ludlow told BBC Wales.

"It was a really positive result for us which sets up for the last three games of the qualifying campaign.

"It was always going to be a tough match, as far away from home as we are, but the girls put in a fantastic performance.

"If we carry on performing like that there's no reason why we can't pick up more points along the way."

Only the eight group winners and six best runners-up are guaranteed automatic qualification to the 2017 tournament in the Netherlands.

The other two group runners-up will contest a play-off for the final qualification spot.

Wales next face Norway at home on 7 June before back-to-back home games against Israel and Austria in September.

Ludlow's side will be guaranteed second spot if they win their remaining three games and Norway beat Austria on 2 June.

"It's going to be hard," former Arsenal captain Ludlow added.

"Our target for the girls is to go into every game we play in and work for the three points.

"If the players play to the best of their abilities we can beat anyone on our day."