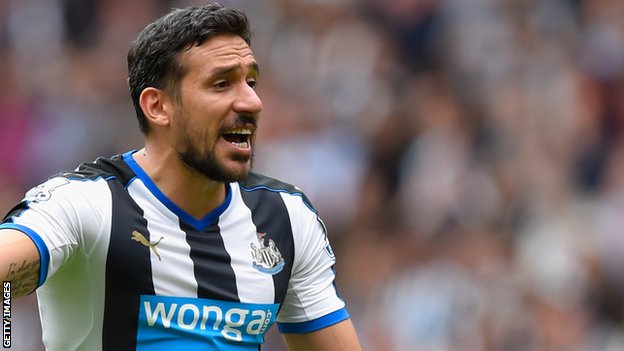 Ex-Newcastle midfielder Jonas Gutierrez claims the club deliberately did not start him in matches so they could release him after cancer treatment.

The 32-year-old is suing the club for in the region of £2m over disability discrimination after he was diagnosed with testicular cancer in October 2013.

The Argentine, who was released in May 2015, was giving evidence on day one of an employment tribunal on Tuesday.

He says he was left out of the team to avoid triggering a new one-year deal.

Gutierrez claims he had to start 80 games during a four-year contract signed in September 2011 in order to trigger a further year at the end of the 2014-15 season.

However, he says then temporary boss John Carver waited until he could not hit his 80-game target before starting him in the final five matches of the campaign.

In a witness statement presented to the tribunal in Birmingham, Gutierrez said: "Due to their concerns about my cancer I consider that the club then ensured that I would not be selected to start in a sufficient number of matches to trigger the option.

"In late April 2015 I was told the club may consider offering me a new playing contract but would only consider this at the end of the season.

"However, I knew by this stage the club had taken steps to ensure the automatic option in the contract was not triggered. I found it difficult to believe that they would in any event offer me a new contract."

'They considered me to be a liability'

Gutierrez, who is now at Spanish side Deportivo La Coruna, claims Newcastle's discrimination against him began in December 2013, two months after he had surgery.

He says Alan Pardew, his manager at the time, told him he did not feature in the club's future plans and that he was free to leave.

"It came as a great shock so soon after my cancer treatment," added Gutierrez, who left the room in tears at one point during the morning session, saying he was "not here for the money" but because the way he was treated by the club "was not right".

"I believe the reason for this was due to my cancer diagnosis and very recent operation to remove the tumour as I had clearly been a crucial part of Newcastle's first-team line-up to this point.

"I think they feared that my illness would mean that I could no longer play at the highest level and they considered me to be a liability rather than an asset to the club."

After further treatment in the summer of 2014 when the cancer returned, Gutierrez says he felt neglected by Newcastle.

"During my chemotherapy treatment, neither the manager, Alan Pardew, nor any club directors contacted me to see how I was feeling or to congratulate me on my recovery," he said.

"This was incredibly disappointing after everything I had done for the club."

Newcastle insist they did contact Gutierrez during his treatment.

The tribunal is expected to last for 10 days, with evidence from Pardew and Carver to follow.