Wales drawn with England at Euro 2016

Wales and England will meet at Euro 2016 after being drawn together in Group B for next summer's finals in France.

Russia and Slovakia are the other teams in their group.

The Republic of Ireland are up against the world's top-ranked side Belgium, Italy and Sweden in Group E.

The first game of the tournament will be at the Stade de France between France and Romania on Friday, 10 June at 20:00 BST. 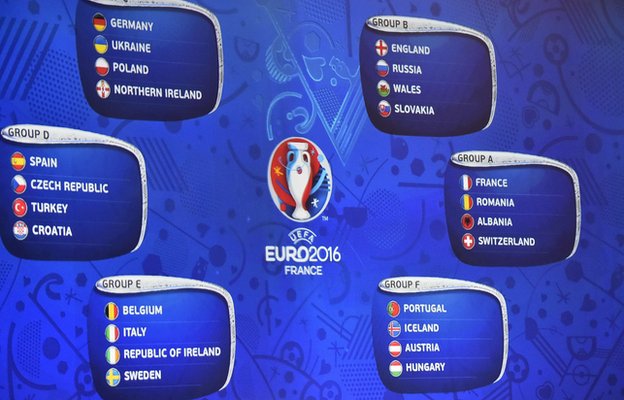 Wales' match against England is the second game for both countries in their group, in Lens on Thursday, 16 June.

Northern Ireland kick off their group against Poland on Sunday, 12 June and end it against Germany nine days later.

The Republic face Zlatan Ibrahimovic's Sweden in their 13 June opener and conclude their group games against Italy on 22 June.

This year's tournament is the largest European Championship ever, with 24 teams.

The top two from each group will go through to the last 16, while the best four third-placed teams also progress - meaning only eight teams are eliminated in the group stages.

England and Wales meet in Group B

England v Wales will be played in Lens

This is Wales' first tournament appearance in 58 years, and boss Chris Coleman had said he wanted to avoid England because it would be "viewed as a battle of Britain" and a "distraction".

But his fears were realised early on in the draw, with the top seeds drawn first - followed by the bottom seeds.

And employers may have to brace themselves for a lot of leave requests on Thursday, 16 June because England's meeting with Wales is a 14:00 BST kick-off.

The winners of Group B will face a third-placed team in the last 16, while the runners-up will face the team who finish second in a group comprising Portugal, Iceland, Austria and Hungary.

'Whatever happens we'll be friends'

England manager Roy Hodgson told BBC Sport: "I feel good about it. There was always a very good chance we would meet one of the home nations. Wales are very organised, they have a strong spirit and a good spine."

Wales boss Chris Coleman: "Well, we've got them, it will be a great game. We would have wanted to avoid it, but we look forward to it. We deserve to be here and I think the tournament will be a fantastic one."

Former England striker Alan Shearer: "For the first time in a long time England will go to a tournament without any real stars. It might be early for them but we do have Cahill, Barkley and Stones, and a very good goalkeeper in Hart.

"Overall, England have to be very pleased with the group they have been drawn in. Yes, it will be tough but if we don't get out of that group there will be something very wrong."

Former Wales striker John Hartson: "I wanted that. It's a great game for supporters, for television, and the players will look forward to it. I think players from both countries will be pleased with that."

Ex-Wales captain Kevin Ratcliffe: "I'd rather be playing England than France, Germany or Spain. There are other countries that actually scare me more than they do."

NI to benefit from information-sharing

Northern Ireland boss Michael O'Neill said this week that he and Republic counterpart Martin O'Neill could share information in the build-up to the tournament: "It is in our interests to work together, if we can help each other."

Martin should be able to provide Michael with plenty of first-hand advice, after NI were placed in Group C with Germany and Poland - the two teams who finished above the Republic in qualifying.

If Northern Ireland, who had never qualified for a European Championship before but headed their qualifying pool, finish top of Group C, they will face a third-placed team in the last 16. If they manage second place, they face the second-placed team from the group containing France, Romania, Albania and Switzerland.

Luckily for Northern Irish employees and employers, all their games are at 17:00 - one of only two groups without a 14:00 kick-off.

Northern Ireland manager Michael O'Neill told BBC Sport: "In many ways it's a good challenge because our strongest options are at centre-back - we've got three Premier League centre-backs, and they will relish the challenge of playing against Thomas Muller and Robert Lewandowski."

NI forward and BBC Two pundit Jamie Ward: "You look at Ukraine as a game to win. No pressure though! We've got a chance to go and play against some of the best players in the world. Hopefully our spirit can carry us through."

Irish luck is out again

The Republic of Ireland had a tough group at Euro 2012, losing to Spain and Italy - both of whom went on to reach the final - and Croatia.

Four years later, there will be a feeling of deja-vu after another desperately difficult draw.

Martin O'Neill's men have been put together in Group E with Belgium, who are ranked number one in the world, Italy - again - and Zlatan Ibrahimovic's Sweden.

To make matters worse, they are in one of the only two groups where the runners-up face the winners of another pool, in this case Portugal's.

Republic of Ireland boss Martin O'Neill: "It couldn't get tougher. Italy should be in Pot One. Sweden is a game to look forward to, so let's go for it. I thought I was going to enjoy the draw; I'm not sure I have done."

Former Republic of Ireland defender Mark Lawrenson: "The Republic of Ireland are better as underdogs. Probably this is the least talented Republic squad that has ever qualified. But they work so hard though, and because they have no stars, they are very difficult to beat."

How the other groups shape up

Hosts France and Portugal appear to have the two most straightforward groups at Euro 2016.

Les Bleus, who have not played a competitive match since 2014, are in Group A with Switzerland, Romania and Albania - who progressed despite not having any player score twice in qualifying.

"Romania performed very well during the qualification stage with the best defence and just two goals scored against them," said France boss Didier Deschamps. "It is the most important match for us."

Portugal, in Group F, were seen as arguably the weakest top seeds. Their rivals for a place in the last 16 are Hungary, Austria and Iceland, who are in their first ever major tournament.

"I don't believe in easy groups, nor in difficult groups," said Portugal coach Fernando Santos. "What I do believe in is work. Iceland eliminated the Netherlands, which says a lot about their potential."

Defending champions Spain, who are aiming to win three European Championships in a row, are in Group D with Croatia, the Czech Republic and Turkey.

Think you know your football? Test your expertise by playing our game and seeing how many results you can predict correctly.