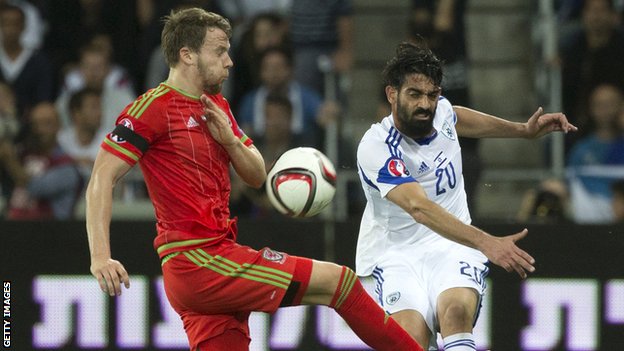 Chris Gunter (l) is Wales' most capped player who is still in the national side, with 58 appearances

Reading full-back Chris Gunter has warned Wales must remain focused after their 3-0 away win against Israel on Saturday.

Chris Coleman's side leapfrogged their hosts to top Euro 2016 qualifying Group B with five matches left to play.

Gunter, 25, says Wales secured a "fantastic victory" in Haifa as they bid to reach a first major finals since the 1958 World Cup.

But Gareth Bale inspired Wales to their biggest away win since a 5-2 victory in Slovakia in 2007.

Wales are unbeaten in five games in a single qualification campaign for the first time since 1976.

They have won three and drawn two of their five qualifiers so far.

Coleman's side next face group favourites Belgium, who beat Cyprus 5-0 on Saturday, on 12 June in Cardiff.

"We need to be careful. It's certainly easy after a fantastic victory when emotion's high to say 'yeah, we are going to do it' but we are still only halfway," said Gunter.

"We have to make sure that in five games time this isn't the pinnacle, but is only a step on the way."

Gunter believes manager Coleman and his staff will help keep the squad grounded going into the clash against the Belgians.

"It's important to enjoy [wins like this]... but to make sure that when we meet back up we'll be focused like we have been," said the former Tottenham and Cardiff defender.

"The good thing is, with the management and staff we have in place, that's exactly how we've been approaching it.

"Hopefully in the next year or so we'll be happy people."