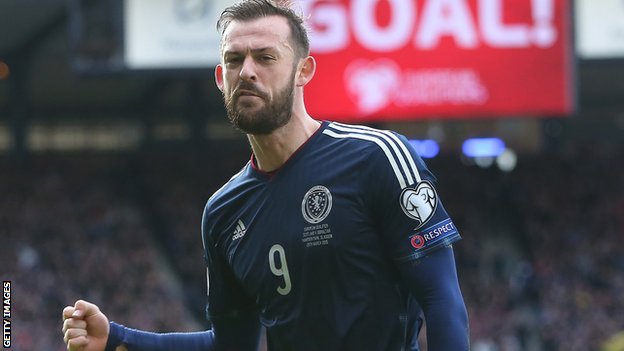 Steven Fletcher was delighted to repay manager Gordon Strachan's faith in him by scoring Scotland's first hat-trick since Colin Stein in 1969.

"It meant a lot that he stuck with me, but that's the way he is," the 28-year-old Sunderland striker said after the 6-1 defeat of Gibraltar.

"I only realised after the match that I'm the first Scottish player to do that in so long. That was a shock.

"I'm delighted to have repaid a bit of that faith."

Not only did Fletcher become the first Scot to score a hat-trick since Stein's four against Cyprus, but the striker had himself only found the net once in 19 previous internationals.

He has also been out of form at club level, having not scored for Sunderland since hitting two against Crystal Palace on 3 November.

But Fletcher headed Scotland back in front in the 29th minute after Lee Casciaro had stunned the hosts by heading a 19th-minute equaliser.

Fletcher headed another in the 77th minute and curled home a low finish just before full-time as Scotland - who also scored through two Shaun Maloney penalties and a Steven Naismith strike - maintained their Euro 2016 qualifying hopes.

The Scots are a point behind Group D leaders Poland and are the best-placed of the nine sides sitting third in their tables, with only one qualifying automatically for the finals and the other eight facing play-offs.

"The gaffer's made a point of standing by the guys who've got us to this position and saying that, whatever anyone else says, he knows we're good players," Fletcher told the Uefa website.

"I feel my game's about more than goals, but you know as a striker that people don't judge you on how many times you link up play, but on how many you score.

"So I was conscious of the fact it had been so long. That said, my confidence genuinely hasn't been dented."

Fletcher's only previous goal for Scotland was in a 2-1 World Cup qualifying victory over Iceland six years ago and he was delighted to end the country's long wait for another hat-trick.

"You just enjoy these days when they come along and they don't come much better than scoring a hat-trick for your country," he added.

"I wondered if Shaun might get there first, but a few of the lads came up after my second and said: 'Go on, make sure you get the match ball'.

"You'd have seen from my celebrations how much the goals meant to me, especially the first. That seemed to take an age to go in."