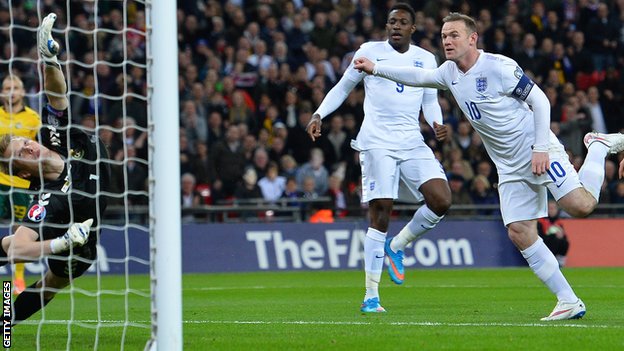 Captain Wayne Rooney claims England are no longer a soft touch as they continue to rebuild following the World Cup.

Roy Hodgson's side failed to get through the group stages in Brazil but face Italy on Tuesday looking for an eighth straight win since.

"You don't want to go into games and teams enjoy playing you," said Rooney.

"You want teams to look at England and think, 'we know we have a tough game - it is going to be physically hard against them'."

Rooney said he also wants opposition sides to know they are going to have to defend and "to have to be good on the ball to keep the ball".

He added: "That is what we want teams to feel when they come up against us. Certainly since the World Cup we have done that."

England have won the first five games of their qualifying campaign for the 2016 European Championships.

They top Group E by six points, with their latest victory a 4-0 win over Lithuania at Wembley on Friday.

If the calibre of opposition they have faced en route to next summer's finals in France has made it difficult to judge England's progress, playing Italy in Turin may be more of a gauge, just over nine months since they lost their opening World Cup group game to the Azzurri in Brazil.

Neither side will be at full strength, with England missing Danny Welbeck, Raheem Sterling, James Milner and Leighton Baines.

But Rooney is still expecting more of a test against the four-time World Cup winners.

The Manchester United forward, 29, said: "Italy will be very good on the ball and there will be times when they are able to play out so we have to make sure we pick our moments right and not get picked off.

"It is moving in a good direction. We are learning with every game since the World Cup. We are getting better and there is an excitement back about England."