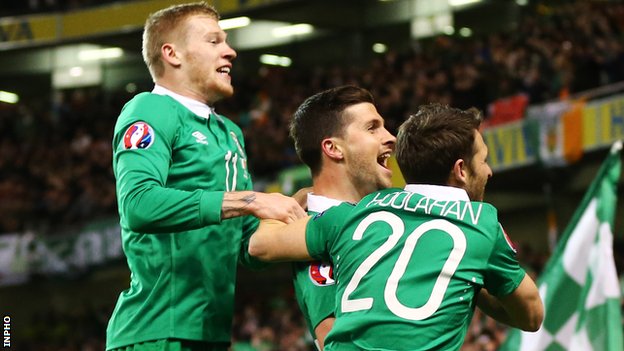 Shane Long's injury-time goal rescued a vital draw for the Republic of Ireland against Group D leaders Poland in their Euro 2016 qualifier.

Aiden McGeady went close for the Irish while Robbie Keane headed against a post with Seamus Coleman missing a great chance before Long's late goal.

The draw leaves the Republic three points behind Poland.

World champions Germany and Scotland earned routine 2-0 and 6-1 Group D wins over Georgia and minnows Gibraltar respectively earlier in the day and it was vital that the Irish got something from the game.

The Republic stay fourth, two points behind Germany and the Scots with the Poles still leading Group D.

Republic manager Martin O'Neill made a number of selection calls with keeper Shay Given handed his his 128th cap and Wes Hoolahan named in an attacking role alongside Robbie Keane as the side showed seven changes from the defeat by Scotland.

With Stephen Ward having scarcely trained during the week because of injury, Hull winger Brady was named at left-back and his mistake allowed Peszko to put the Poles ahead on 26 minutes.

Brady had already exhibited nervousness with a few sloppy touches and was finally punished as he was dispossessed by Peszko deep in the Irish half before the Cologne striker fired an unstoppable angled shot past Given.

Even before the goal, the Polish fans had been making most of the noise in the Aviva Stadium and Peszko's superb finish sent them into raptures.

The Poles had bossed possession early on with Bayern Munich star Robert Lewandowski combining well with Maciej Rybus and only Norwich man Hoolahan looking in any way creative for the home side.

Brady's nightmare moment came six minutes later as he was caught in possession with covering defender Marc Wilson unable to prevent Peszko firing past Given.

Clearly rattled by the goal, the Republic chased shadows over the next 15 minutes before Aiden McGeady went close to levelling with a chipped effort as the Irish produced a late flurry before the interval.

As would have been expected, the Republic continued to raise their tempo after the break with a deflected Brady cross clipping the outside of a post in the 52nd minute.

After Marc Wilson headed a chance straight at Lukasz Fabianski in the 64th minute, Keane nodded against the woodwork on 72 minutes with the keeper getting a crucial touch following a cross from lively Republic substitute James McClean.

Seamus Coleman horribly blazed an even better chance wide nine minutes from time as the suspicion that it was not going to be the Republic's night grew.

However, the Republic refused to give in and their late industry was rewarded as 83rd-minute substitute Long lofted over Fabianski in the 91st minute after a header on from Hoolahan.

The Republic had gone into the game needing three points to put them in a strong position in the group but in the end were mightily relieved with a point which keeps their hopes alive.

Robbie Keane headed against the Poland woodwork in the second half

Poland's fans made most of the noise at the Aviva Stadium