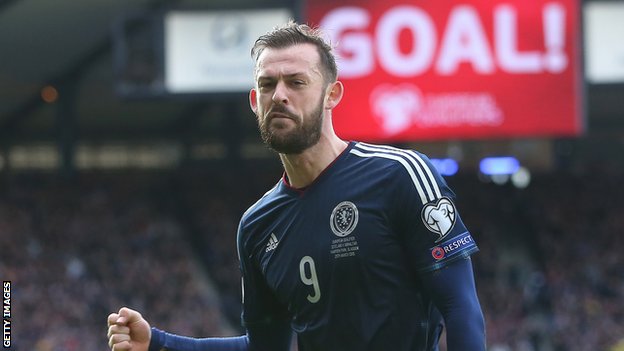 Steven Fletcher scored Scotland's first hat-trick for 46 years as they recorded an emphatic victory over Gibraltar.

However, Fletcher restored the lead before Maloney tucked away another penalty and Steven Naismith got Scotland's fourth.

The Scots laboured through the second half until Fletcher headed home and curled in for Scotland's sixth.

That hat-trick - the first since Colin Stein netted four against Cyprus in 1969 - gave Scotland their biggest win since beating the Faroe Islands 6-0 in 2006.

The result means Gordon Strachan's side keep pace with Germany, who beat Georgia 2-0 and, like Scotland, move on to 10 points, with Poland and the Republic of Ireland playing later in the evening.

Strachan had hinted beforehand at a change of system against a team who had conceded 21 and scored none in their four previous competitive fixtures.

And so it proved as he played just one central defender in Russell Martin, opting to load the attacking areas in the quest for goals.

But Scotland found Gibraltar awkward opponents, struggling to find a sufficiently high tempo or a crispness of passing to pick the lock of a well-drilled and stuffy side.

As they began to exert their authority, Fletcher might have had a penalty and moments later Maloney did, using his experience to dangle a trailing leg into the Gibraltar keeper Jamie Robba.

Steven Fletcher hit a hat-trick, the first for Scotland since Colin Stein in 1969

On the say-so of the assistant behind the goal, the referee awarded the spot-kick, which Maloney expertly converted.

Within moments, though, Gibraltar had their landmark goal, as the vulnerable-looking Scotland backline was exposed and Lee Casciaro sent the visiting supporters into raptures with a confident finish past David Marshall.

The Scots persevered, without ever approaching the form they have shown previously under Strachan, and regained the lead when Fletcher ended a six-year wait for an international goal by heading a loose ball past Robba.

Only then did Gibraltar begin to lose some of their shape and when Naismith was clipped in the box by Casciaro, Maloney scored his fourth goal of the campaign from the spot.

Naismith made it four before the break, side-footing in from an Ikechi Anya cross to put a gloss on the scoreline that did not necessarily reflect a lacklustre performance.

The same could be said for the second-half display as Gibraltar refused to collapse, but Fletcher's late interventions - the first a header from Jordan Rhodes' cross, the second a cool, curling finish from the edge of the box - won him the match-ball.

The result ensured Scotland head to Dublin in June in buoyant mood, for what could be a pivotal meeting with the Republic of Ireland in the quest to reach Euro 2016. 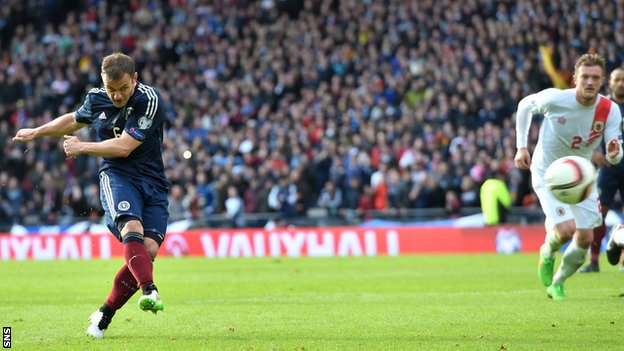