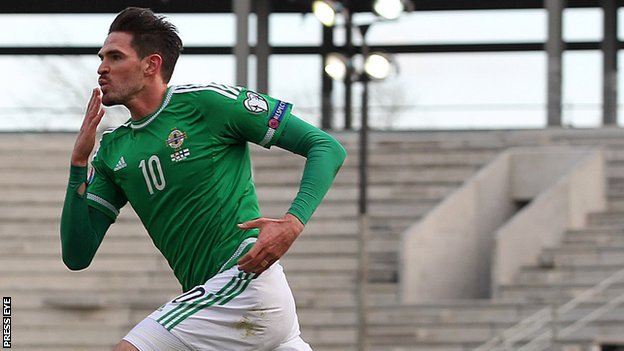 Kyle Lafferty scored both goals as Northern Ireland beat Finland to boost their chances of a first major finals appearance since the 1986 World Cup.

With four wins from five games, they trail Romania by a point at the top of Euro 2016 Qualifying Group F.

Lafferty scored with a right-foot volley and then made it five goals from five qualifiers with a guided header.

Michael O'Neill's side are four points clear in the second automatic qualification place after Hungary were held to a 0-0 draw at home by Greece.

Lafferty's two goals have taken his total in qualifying to five - joint-second with Germany's Thomas Muller and Israel's Omar Damari, and one behind Danny Welbeck of England.

The striker's form for his country contrasts with a tough season at club level, having been sent out on loan to Turkish side Caykur Rizespor in February after struggling at Championship side Norwich City.

Northern Ireland boss O'Neill made a major selection call by leaving out Brighton defender Aaron Hughes, with the 35-year-old primed to overtake David Healy as his country's most capped outfield player.

The match pitted the Northern Ireland boss against a familiar figure as his Finnish counterpart, Mixu Paatelainen, was the man who gave him his coaching break as his number two at Scottish club Cowdenbeath.

And Paatelainen's side did not look like a team ranked 35 places behind their hosts as a bright start saw Teemu Pukki's drive force Carroll into a fine save at his near post.

Chris Baird's impressive header from Chris Brunt's delivery was disallowed for offside and Jamie Ward then found himself through on goal but his right-foot shot was well saved by Lukas Hradecky.

The home support did not have to wait long for a goal, as Lafferty continued his remarkable international scoring run with a clinical finish after latching onto a header from Niall McGinn.

The striker then brought his overall tally in the green shirt to 14 by directing a header into the bottom right-hand corner from Conor McLaughlin's precision right-wing cross.

The Finns' failure to score in the opening period meant Northern Ireland have gone nine games without conceding a goal in the first half.

The hosts began the second half in enterprising fashion and Niall McGinn squandered a good opportunity to extend his side's advantage when he skewed the ball over the bar after getting on the end of Jamie Ward's mis-directed shot.

Finland substitute Joel Pohjanpalo fired wide from three yards, before Sadik made it a nervy finish for the home side by blasting home in added time.

The result ends any realistic hope of Finland making the finals in France, but Northern Ireland, who have never made the final stages of the European Championship, remain on course to celebrate the 30th anniversary of their appearance in Mexico with a spot in the final 24 next summer.