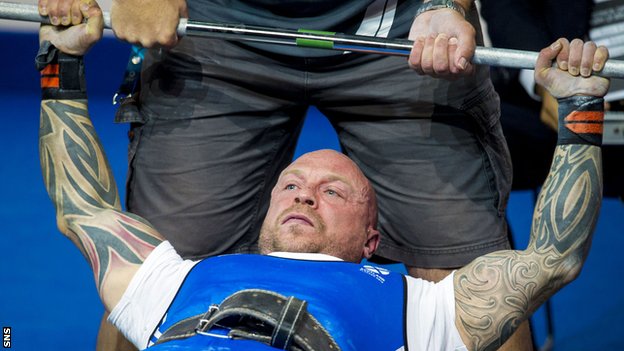 Micky Yule competed for Scotland in the Glasgow 2014 Commonwealth Games

Micky Yule will represent Great Britain in powerlifting at this summer's Paralympics - yet it has been the flag of another country that has inspired him in his bid for qualification.

"My whole house is covered in Brazilian flags and I've been training with the flag right above me for about three years now," he explained.

"It's always there. I didn't want to forget where we were trying to go. Every time I trained, it was always there. It's the last thing I see before I lift or put the gym lights off."

It certainly worked, with Edinburgh-born Yule's inclusion in the squad for Rio confirmed on Monday.

Yule - who was a staff sergeant with the Royal Engineers in Afghanistan in 2010 when he lost both legs in an explosion - has had to work hard over a long period to secure his Paralympics debut. 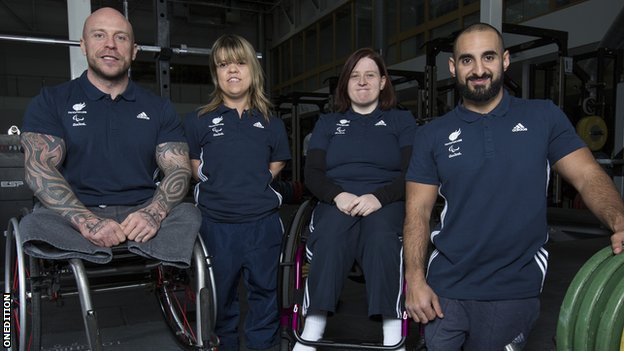 "I knew I had to lift at least another 15kg more than I had ever lifted before, so the pressure was on," he said.

"It all came down to a big competition in Malaysia and I just smashed it on the day. It was only the top eight in the world involved."

Yule impressed in that competition by qualifying in two weight groups - the 65kg and 72kg - and British Weightlifting had to decide which category to select him in.

They opted for the 65kg group, meaning Yule has to lose 6kgs of weight, which he jokes he's not overly happy about.

In the run-up to the Paralympics, he will compete at next month's Invictus Games in Florida, where he could be up against powerlifters who will also be in Rio.

Opponents 'better be on their game'

Yule - ranked fifth in the world - finished fourth in the 70kg weight group at Glasgow 2014 despite being injured.

"The experience of Glasgow 2014 will be massive," he explained. "I feel brilliant from the experience I had at the Games and I'm not finished with the Commonwealth Games - it's an itch I've still got to scratch and it will bug me until the Gold Coast [in 2018].

"I'm going there [to Rio] to be top five in the world, but if any of those athletes who have been at numerous Paralympics make one mistake out there, I'm just going to snap it up. They had better be on their game when I'm lifting out there."

Confidence and motivation are not in short supply where Yule is concerned, and he is so focused that he will only allow himself to enjoy his Paralympics selection after Rio.

"I think emotions will be running high but it's just trying to keep those emotions in check," he added.

"I put about 190kg on the bar so I need to have total controlled aggression. Under the surface I'm just boiling - because I need to be aggressive to lift the weight - but it can't go so far that I lose my technique.

"I'm going to compete and compete well. I don't want to come back thinking I could have done 1kg more.

"After that, that's when I'll be able to absorb all the atmosphere and emotion of Rio."

The Paralympics run from 7-18 September.