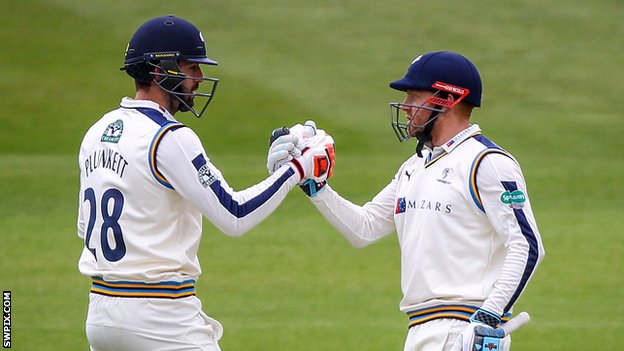 Bairstow and Liam Plunkett, who made his first century for Yorkshire, put on 227 runs for the seventh wicket.

Tom Alsop eventually had Bairstow caught at long-on, while Plunkett made 126 before being bowled by Will Smith as Yorkshire declared on 593-9.

An unbeaten 76 from James Vince helped the visitors reach 141-5 in reply.

Hampshire used nine bowlers in total, with only opener Michael Carberry and wicketkeeper Adam Wheater not being thrown the ball.

Despite four of their top six batsmen making just 20 runs between them, Yorkshire reached their highest total against Hampshire.

The away side's response got off to the worst possible start as opener Alsop was trapped lbw by Ryan Sidebottom before Plunkett had Carberry caught as slip by Alex Lees.

Vince's faultless innings, which included 11 fours, was in complete contrast to that of his batting partners, with Hampshire losing wickets at regular intervals.

They need another 302 runs to avoid the follow-on.

Milestones for Bairstow and Plunkett

Bairstow said he and Plunkett had played their "natural games" and praised the Adil Rashid's "intent" early on.

"Then the way Liam came out and played was absolutely fantastic," added Bairstow. "You saw from ball one how cleanly he struck it. When someone's striking it like that, you just let them go as long as possible."

Bairstow thinks Hampshire have a "tough task" to make up ground.

"Potentially, we've got 250 overs, which I'm sure the bowlers are really looking forward to," he said. "If they pull their finger out, we hope it will be a bit less than that."