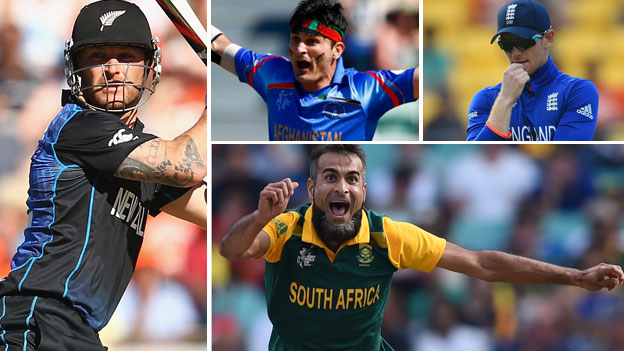 And then it was all over.

Their comprehensive final victory over fellow co-hosts New Zealand in Melbourne gave them the world title for a fifth time.

But who were the other winners of the 11th Cricket World Cup? And who had a tournament to forget?

Listen to the Tuffers & Vaughan Cricket World Cup awards on BBC Radio 5 live on Monday from 2100 to 2230 BST.

Man of the tournament

Australia pace bowler Mitchell Starc deservedly took the official award for his 22 wickets, but no one has personified the World Cup quite like New Zealand captain Brendon McCullum.

His ultra-aggressive batting and inspirational leadership captured the imagination of his nation, who embraced the task as co-hosts with more enthusiasm and gusto than their neighbours across the Tasman Sea.

When he finished speaking after the final defeat by Australia, McCullum was applauded by the assembled media.

"We've created memories and friendships which will last for the rest of our lives," said McCullum.

"We've had some support from our country which we never believed was possible. We're incredibly proud of what we've been able to achieve."

Team of the tournament

They might not have progressed from the group stage, but Ireland almost single-handedly ignited the debate over the future of the sport and the International Cricket Council's development plans.

Victories over Test sides West Indies and Zimbabwe took them to the brink of the quarter-finals, only to miss out on net run-rate.

But any further World Cup participation is in doubt, with the next tournament set to be cut from 14 teams to 10, making it harder for the Irish to qualify.

ICC chief executive Dave Richardson told Test Match Special that the matter is to be discussed by the governing body, but said the 10-team plan was part of "an agreement with broadcasters".

Prior to that, Ireland captain William Porterfield fired a shot to the ICC by saying: "Why don't 10 teams just play cricket and every other country in the world not bother?

"It's the ICC, supposedly global. They have to develop the game."

Match of the tournament

New Zealand pulled off some thrilling victories over Australia and South Africa, but it's easy to create drama when you are playing against your oldest rivals or for a place in the World Cup final.

For Afghanistan and Scotland, something much more important was on offer - a first World Cup win. With stakes so high, they served up a suitable thriller in Dunedin.

A game that ebbed and flowed, with control oscillating between the two sides was eventually settled when Afghan number 11 Shapoor Zadran hit the winning runs with three balls to spare.

His celebration, a wide-armed run ending with a collapse to the ground, provided one of the most enduring images of the tournament.

If that wasn't enough, the outpouring of joy back in Afghanistan caused six people to be injured by guns fired in triumph.

"It was an amazing game of cricket," said former England spinner Vic Marks. "Not the highest quality but as dramatic as I have seen in a long time. Afghanistan, against all the odds, triumphed."

Moment of the tournament

It's impossible to separate two, both involving New Zealand.

The first came as a result of the astonishing finish to the semi-final victory over South Africa, where Grant Elliott hit the penultimate ball of the match for six to bring an eruption of noise from 40,000 ecstatic Kiwis inside Eden Park.

Amid the celebrations, Elliott did not forget bowler Dale Steyn, who had sunk to the turf in disappointment. The batsman offering his hand to help Steyn to his feet was reminiscent of Andrew Flintoff and Brett Lee during the 2005 Ashes.

"You have to feel compassion," said Elliott. "I felt quite sorry for him. We could have lost and it could have been me sitting there."

The second was the defining action of the final, even though it came when the match was only five deliveries old.

New Zealand's talisman McCullum aimed two wild swings at Starc, missed with both, and was then bowled by a devastating yorker. As the ball made the bails light up, Kiwi hopes were punctured and Australia were on the way to glory.

"In a World Cup final, against Mitchell Starc with a swinging ball, Brendon McCullum didn't give himself an opportunity," said former England batsman Kevin Pietersen.

Need you ask? England's World Cup lurched from one shambles to the next, before the final humiliation came against Bangladesh.

Assistant coach Paul Farbrace suggested that they failed to recover from heavy defeats by Australia and New Zealand in the opening two games. It might be more accurate to say they have not recovered from losing the 1992 final to Pakistan - they have not won a decisive World Cup game since.

"We seem to be light years behind other teams in the way we think about one-day cricket," said former England batsman Geoffrey Boycott. "The game has moved on very quickly and it is very different from even 10 years ago."

Shot of the tournament

Catch of the tournament

In the same match, Daniel Vettori urged his injury ravaged, 36-year-old body into a Michael Jordan-style leap to catch a Marlon Samuels shot one-handed on the third-man boundary. As part of the celebrations, Vettori was thrown an orange t-shirt, part of a campaign that offered spectators the chance to win $1m if they took a one-handed catch.

South Africa leg-spinner Imran Tahir set off on a sprint around the square every time he took a wicket. When asked why this was the case, Tahir explained that it's always been part of his game.

"I played a club game and I took a very good catch," he said. "I think I ran out of the ground, so they had to tell me which way is back to the ground. I was on the road, I don't know where I was. It's a true story."

Scotland pace bowler Iain Wardlaw hit the headlines for apparently climbing Mount Everest before he became a professional cricketer. Except the story wasn't true, rather a joke that spread far and wide.

"It got totally out of hand," he said. "I had people from Nepal tweeting to say 'good luck, I'm sure it won't be as tough as climbing the mountain'."

George Bailey captained Australia on the opening-day victory over England, made a half-century, but was not seen again once Michael Clarke returned to fitness. To make light of his time as 12th man, Bailey even turned up to the team's celebration in Federation Square wearing a substitute's fluorescent bib.

Japan Cricket Association:  Dear @ECB_cricket, this might not be a great time, but as there's room in your schedule, fancy a game in Japan on your way home? #challenge