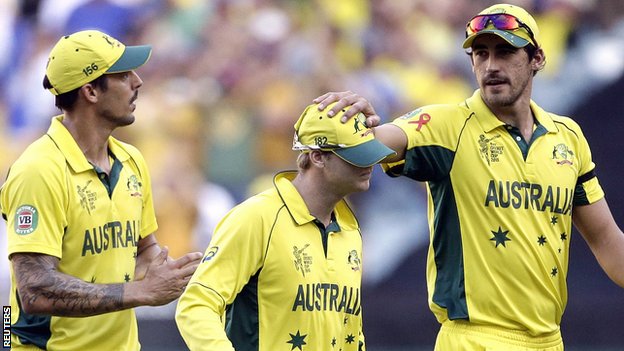 Cricket World Cup 2015: Aussies have me quaking over the Ashes

In the end, the best team won the World Cup. Once again, that team was Australia.

At the beginning, we had them as the favourites to win a fourth World Cup in five because of the depth in their squad and the advantage of playing all but one of their matches at home.

It wasn't always easy and they had issues to overcome, talk surrounding the position of Michael Clarke and the fitness of James Faulkner.

But ultimately, a team showing typical Australian belief was celebrating at the Melbourne Cricket Ground after winning a one-sided final against New Zealand.

Their triumph was built on some hostile fast bowling, with captain Clarke identifying that his bowlers won his side the trophy.

One of his pacemen, Mitchell Starc, provided the defining moment of the final when the game was only five deliveries old.

Yes, you can say it was disappointing from Brendon McCullum, who was bowled from the third ball he faced by a Starc yorker after two wild swipes.

I've always said McCullum should play in his ultra-aggressive manner, but today he failed to weigh up the options. If you're going to play like that against the likes of Starc, you are not going to win many.

From there, Starc took complete control, continuing the fine form that resulted in 22 wickets across the competition and the man of the tournament award.

His success is what happens when a bowler gets into a rhythm, when everything clicks. He runs in beautifully and has swung the ball at very high pace.

As a left-armer, Starc naturally takes the ball back into the right-hander, stopping someone like McCullum from freeing his arms. He does that consistently, frequently throwing in those devastating yorkers.

I expect to see him bowling very well against England this summer. Before this tournament, we knew all about Mitchell Johnson, but now we are aware of Starc's threat too.

They have formed a trio with Josh Hazlewood, a strapping seam bowler who should also be suited to English conditions, and Australia also have the likes of Ryan Harris, James Pattinson and Patrick Cummins in reserve.

It is that depth of fast bowling that has an Englishman quaking in his boots when thinking about what might happen in the Ashes.

Granted, Australia have gaps to fill. There are questions about Clarke's future, about who might open with David Warner and the strength of their spin bowling, but there is a gulf between the two teams.

Not only that, but the England team seem to be rebuilding on constantly shifting sands, while Australia's foundations are rock-steady.

In the next two months, England must get their house in order, but that in itself could hamper their Ashes campaign.

They need victories in the West Indies and at home against New Zealand to get used to winning again, which means the likes of James Anderson and Stuart Broad may not get the rest they need.

If the two spearheads of what looks to be an inferior attack are weary, then England will be at a big disadvantage. England's batting line-up is taking shape, but to win Test matches you have to take 20 wickets.

Australia, led by the likes of Starc and Johnson, are more than capable of doing that. Only time will tell whether England have the same ability.

Having regained the Ashes and the World Cup in little over a year, Clarke will now turn his attention to doing something that Australia have not done for 14 years - win the Ashes in England.

Even if you have reservations about him, which some have, then you have to admire what he has achieved.

The death of Phillip Hughes would have been one of the lowest moments of his entire life, the emotions he must have felt extraordinary.

Yet, through a battle for fitness, he regained his place in the Australia team and led them to one of the highlights of his professional career.

He batted very well in the final, but could not quite finish the job. That honour was left to Steven Smith, perhaps the next Australia captain, hitting the winning runs to seal their triumph.

In doing so, he ended a tournament that I will remember for England's failure, the moment they realised how far behind the rest of the world they are in this form of the game.

I can also reflect on some outrageous hitting, not least the remarkable innings of AB de Villiers against West Indies, which I was lucky enough to see.

And I will remember New Zealand showing us the right way to play the game, with aggression and sportsmanship - the two are not mutually exclusive.

McCullum's men can be proud of what they have achieved, giving the sport of cricket a massive boost in their homeland, where rugby union reigns supreme.

They fell short in the final, where Australia were worthy winners.