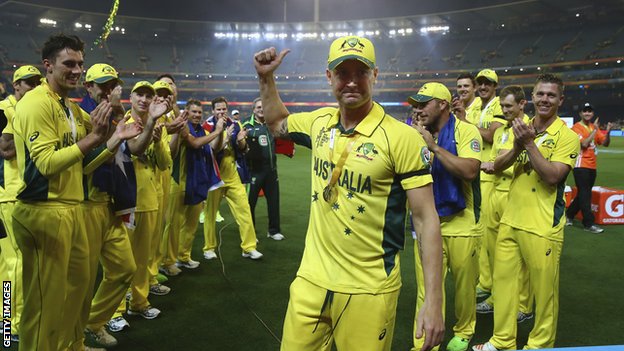 Michael Clarke has announced his retirement from one-day internationals

Just before the 2011 World Cup, the Australian Daily Telegraph ran a vote asking fans who should be the captain of the national cricket team. Michael Clarke came fourth.

Four years later, Clarke was grasping the trophy under a shower of golden tickertape in front of 93,000 at the Melbourne Cricket Ground, a highlight of his career perhaps only bettered by the 5-0 Ashes whitewash he led a year ago.

This is not a straightforward tale of man proving his doubters wrong, rather another chapter in the love-hate-love story of Clarke and Australia. Ups and downs, fallouts and make-ups, hero to villain and back again.

To an outsider, it is hard to understand why Clarke is not universally adored or, at the very least, accepted and admired in his own country.

As well as being an Ashes and World Cup-winning captain, he is fifth on the all-time list of Australia Test run-scorers and one of the best tacticians in the game.

On a human level, it was Clarke who led the country in grief after the death of his friend and team-mate Phillip Hughes, delivering a heartfelt eulogy at the funeral.

But Hughes's death was a tragic interruption to another Clarke drama, the captain at odds with Cricket Australia over his fitness.

It was a soap opera that would continue to play out up to and, at times, during the World Cup, which would end with the final chapter of Clarke's one-day international career.

To understand why Clarke is not a national treasure, one needs a lesson in his past and the Australian psyche.

"There is a view that he lives a celebrity life, going back to the time he dated the model Lara Bingle," said ABC commentator Jim Maxwell.

"Australians like their sporting heroes to be more laconic, not over the top. They can handle the larrikin but they don't like people who seem to be, even if it's not true, in their own bubble."

It was that image that Clarke had to fight when he took over the captaincy in 2011.

The flash haircut, the ear-ring and modelling in underwear adverts did him no good, neither did rumours of a dressing-room bust-up with 'fair dinkum' Aussie Simon Katich. Hence when fans were asked for their say on who should succeed Ricky Ponting, Clarke came in behind Katich and Shane Watson (and Ponting, for that matter, whom a greater number wanted to stay on).

Clarke, though, took to leadership in a manner that few predicted. As runs flowed and the Australia team improved, the Sydney Morning Herald printed 'An Apology to Pup', describing him as "a great Australian that we misjudged".

Fast-forward three years to the World Cup, a once-in-a-career opportunity for an Australian to captain his country on home soil in cricket's biggest event.

By now, Clarke's battle with injuries was a national conversation on the scale of David Beckham's metatarsal, with specialists on radio and television discussing his troublesome hamstrings.

Then he was forced into a role that no international sportsman ever expects to fill.

"The process of dealing with the death of Phillip Hughes showed us that he has significant leadership ability," said Maxwell.

However, any goodwill garnered in that most difficult of times was quickly erased. Clarke reinjured his hamstring in the first Test after Hughes's death, a problem he said might end his career.

In his absence, Steve Smith proved himself to be a capable deputy, as well as the down-to-earth sort that Australia embraces. The conversation over whether Clarke, without a one-day hundred since 2013, should return as captain had begun.

Coach Darren Lehmann's intervention halted it to a degree, but that did not stop questions being asked throughout the tournament, particularly as he shifted himself up and down the batting order. Selfless leadership, or acknowledgement that he was not worth his place?

After the semi-final victory over India, it was put to the skipper that he was a weak link.

"I think my record holds its place. I'm not concerned at all," was his bristling reply.

Even so, the Sydney Morning Herald dubbed the showpiece against New Zealand at the MCG "The World Pup Final", ramping up the pressure and expectation on Clarke and his team.

Clarke, though, shifted the focus by announcing his retirement the day before the final.

Still he could not do right for doing wrong. The critics who questioned his place in the team now pointed to the timing of his announcement. "Typical Clarke, always wants the story to be about him," were the mutterings.

The script of the final then seemed to be written for Clarke, who walked to the crease at a time when his team could have wobbled, but drove and cut his way to 74 in his final ODI innings, leading his team to the brink of glory.

In the end, he was out eight runs short of victory, afforded the luxury of walking off alone to take the applause of a standing MCG crowd and team-mates who were waiting for him on the boundary edge.

Trophy lifted, press to meet. Up goes the hand of a journalist. "Why did you announce your retirement the day before the final and not the day after?"

"I'm hoping the next week is full of positive things about every single player in that changing room and what they've achieved in this tournament. But you guys will dictate that."

Is that good enough for those who think Clarke is only about Clarke?

Either way, it's hard not to acknowledge both of the journeys Clarke has been on during the Australian summer. The physical road to play in the World Cup after hamstring surgery, the emotional return from the death of the man he called a "little brother".

"I had to fight my backside off and work as hard as I possibly have to get back into the team after surgery," said Clarke.

"And then to deal with what we've all dealt with over the last few months and to win a World Cup in front of your home fans, it's taken amazing discipline from all the players, a lot of hard work.

"It's a fitting reward for the pain everyone has gone through."