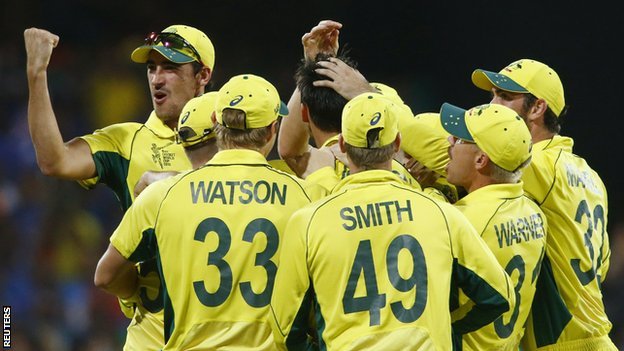 Australia powered into the World Cup final with a 95-run victory over defending champions India in Sydney.

Steve Smith struck a fluent 105 from 93 balls and Aaron Finch 81 as Australia posted 328-7, the highest score in a World Cup semi-final.

India made a solid start to their reply but lost four wickets for 32 runs and fell well short on 233 despite captain MS Dhoni making 65.

They will do so looking for their fifth World Cup crown - no other team has more than two - and on the back of a seventh semi-final win in as many attempts.

For India, the defence of the trophy they won on home soil four years ago and a run of 16 consecutive wins in major one-day tournaments - the World Cup and Champions Trophy - is over.

They can reflect on how their top order fell apart after openers Shikhar Dhawan and Rohit Sharma put on 76 inside 13 overs, but perhaps Dhoni's biggest mistake was calling incorrectly at the toss.

As a result, India, who failed to win any of the 10 matches on their tour of Australia that preceded the World Cup, were made to bowl first on a Sydney pitch that was full of runs.

Even then, Australia failed to fully capitalise on the second-wicket stand of 182 between Smith and Finch, as Michael Clarke's men were stunted by the off-breaks of Ravichandran Ashwin and a curious collective failure against back-of-a-length bowling.

In all, four Australia batsmen were undone by the short ball, the first being David Warner, offering a leading edge to Umesh Yadav.

That brought Smith to join Finch, who began with uncertainty and rarely looked at his best, but showed tenacity to support his free-scoring partner.

With his familiar shuffle across the stumps, Smith whipped, clipped and pulled three-quarters of his runs through the leg side to become only the fifth man, and first Australian, to score a hundred in a World Cup semi.

As Smith and Finch traded sixes, Australia looked set to move out of sight, but Smith's hook to deep square leg off Yadav signalled a slowing of the pace.

Four wickets for 51 runs left Shane Watson and James Faulkner to rebuild momentum, with Mitchell Johnson's nine-ball 27 carrying Australia to a score they would have earlier seen to be the bare minimum.

And Clarke's men were made to look vulnerable by Rohit and Dhawan, the former going after the short ball, the latter targeting Faulkner with drive after drive.

Fortune also seemed to be going India's way in what became an increasingly bad-tempered contest. Rohit was reprieved in the first over when an edge off Mitchell Starc was adjudged not to have carried to Watson at first slip, while Dhawan was dropped by a flying Brad Haddin off Josh Hazlewood.

Hazlewood, though, returned to have Dhawan sky a catch to cover and, after Johnson's extra pace caused Virat Kohli to top-edge and removed Rohit's leg bail, Australia were rampant.

When Suresh Raina edged Faulkner, all seemed to rest on Dhoni, but his acceleration did not come until the 43rd over, with 121 required and only four wickets in hand.

Glenn Maxwell's direct hit ensured the assault was not sustained and any slim hopes India maintained departed with their captain.

Steve Smith now has 346 runs for the tournament at an average of 57.66

Umesh Yadav's four wickets took him to 18 for the tournamen. He finishes as India's leading wicket-taker

Mitchell Johnson starred with bat and ball for Australia. His 27 not out helped Australia to 328-7