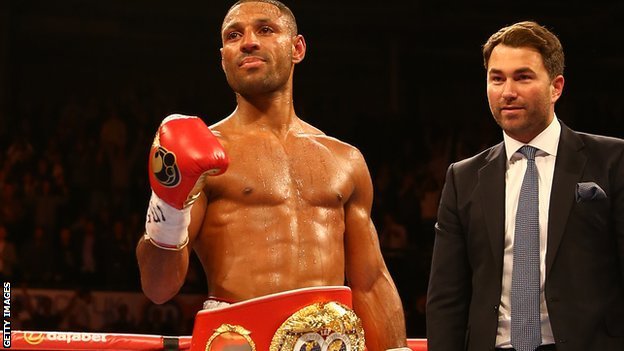 Kell Brook has the potential to be the biggest fighter in Great Britain, according to promoter Eddie Hearn.

The unbeaten 28-year-old retained his IBF world welterweight title on Saturday with a fourth-round victory over Romanian Jo Jo Dan.

WBA super-middleweight champion Carl Froch, 37, has suggested it is likely he will retire this year.

"Carl was there on Saturday and Kell is the perfect replacement as the star of British boxing," Hearn said.

"I think Kell's virtually there at the moment. He has the ability to beat the very best.

"There are no other British fighters out there who have beaten the best in their division so it's there for Kell to take. What a future he has ahead of him."

Froch, who has 33 wins from 35 professional fights, has not fought since beating George Groves at Wembley Stadium in May 2014.

Hearn and Brook have both spoken since the fight against Dan about wanting to take on fellow Briton Amir Khan over the summer.

A date of 13 June has been suggested for the potential bout but, if that meeting cannot be arranged, Hearn believes Brook could fight in advance of that.

"Would you be making a call after seeing what Kell did on Saturday night? They don't want to fight Kell and I understand that," Hearn told BBC Radio Sheffield.

"We're looking for immediate momentum and Saturday was a stroll in the park for him.

"The O2 is a wonderful venue and we have a show there on 30 May. Could Kell turn around and get out as quickly as that? We don't know but he is ready to go."

Saturday marked the Sheffield fighter's return to the ring for the first time since he was stabbed in the leg while on holiday in Tenerife.

Despite Brook admitting he thought he might never walk again after the attack, Hearn has no doubts about his fighter's long-term credentials.

"There's so many options and he was back in the gym on Monday asking me what's next," he added.

"I think he has realised since what happened in Tenerife that life is about capitalising where you can. He has such a good opportunity now to be remembered and make a lot of money."