Arsenal manager Arsene Wenger will try and sign Liverpool forward Raheem Sterling in the summer as the 20-year-old continues to delay signing a new contract at Anfield. (Daily Mirror) 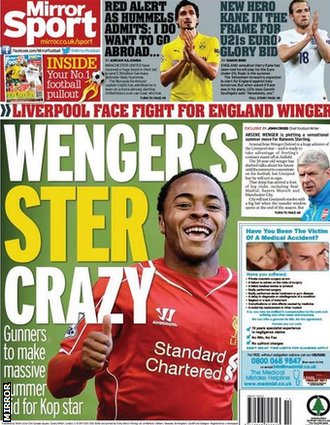 Croatian midfielder Luka Modric, 29, could be heading back to the Premier League with Manchester City. The former Tottenham star may be forced out of the Bernabeu to make room for 22-year-old Paul Pogba. (Daily Star)

And City are also lining up a summer move for Spanish striker Alvaro Morata, 22, who has scored 11 goals for Italian champions Juventus since a £15.8m summer move from Real Madrid. (Daily Mirror)

Borussia Dortmund's 26-year-old defender Mats Hummels, a Manchester United target, says he is "open to the idea of playing abroad". (Kicker - in German)

Colombian striker Radamel Falcao has said he is "100% with Manchester United" as the 29-year-old plays down interest from Juventus. (Caracol Radio - in Spanish  )

Barcelona want to sign a "tall striker" and are targeting Juventus's Fernando Llorente. If they fail to sign the Spanish international then they will consider Manchester City's Edin Dzeko, 29, Fiorentina's Mario Gomez, 29, or Southampton's Graziano Pelle, 29. (Sport - in Spanish)

Juventus sent their scouts to watch Chelsea midfielder Oscar, 23, play for Brazil against France in Paris on Thursday. (Daily Mail)

Liverpool are preparing a £15m bid for Derby's 19-year-old midfielder Will Hughes. (Metro)

Playing for Arsenal would be a "dream", says Chile midfielder Charles Aranguiz, 25, who has been linked with a move from Brazilian club Internacional. (Daily Mirror)

But the Tottenham striker, 21, will be allowed to make the final decision over his involvement at the tournament in the Czech Republic. (Daily Mail)

Wayne Rooney says England are a different proposition for opposing teams since the World Cup because they have found an "aggressive" streak. (Guardian)

Aston Villa manager Tim Sherwood's job could be under threat as owner Randy Lerner discusses selling the club to an American consortium for £150m. (Sun)

The Football League is planning to carry on with League One and League Two throughout the 2022 winter World Cup in Qatar. (Daily Express)

Manchester United winger Ashley Young, 29, will have to take a pay-cut to secure a new three-year deal at Old Trafford. (Daily Star)

However, ex-Barcelona boss Van Gaal has been branded "garbage" by legendary Bulgarian Hristo Stoichkov, who played under the Dutchman at the Nou Camp. (Sun) 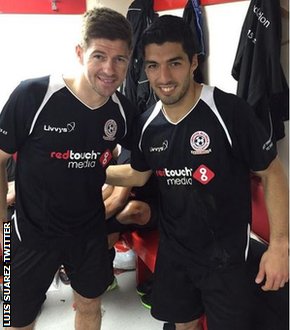 Suarez captioned the picture: "Unbelievable to be back at Anfield and surrounded by great players... Here a picture with the greatest one!"

Barcelona's Luis Suarez posted a picture on Twitter  after returning to Anfield for an all-star charity game. The former Liverpool striker paid tribute to departing captain Steven Gerrard calling him "the greatest one."

Bayern Munich's Xabi Alonso  tweeted a picture from the match, too, as did his team-mate and former Liverpool goalkeeper Pepe Reina.  Another former Anfield favourite, Fernando Torres,  also enjoyed his visit down memory lane.

Italy striker Mario Balotelli, who scored in the match which finished 2-2, took a selfie with Didier Drogba and Thierry Henry and posted it on his Instagram page.

And former Liverpool defender Jamie Carragher, who picked one of the teams, conceded on Instagram   he had been 'nutmegged' by Suarez during the match.

Gareth Bale is the fastest player in the world running with the ball, according to a Fifa-backed study by Mexican Premier League club Pachuca. The Welshman reaches a speed of 36.9 kph. Second is 22-year-old Mexican Jurgen Damm, who plays for Pachuca. (Marca - English version)