Manchester City and Chelsea want to sign Everton's England international midfielder Ross Barkley, 21, who has been valued at £50m by his club. (Daily Star Sunday) 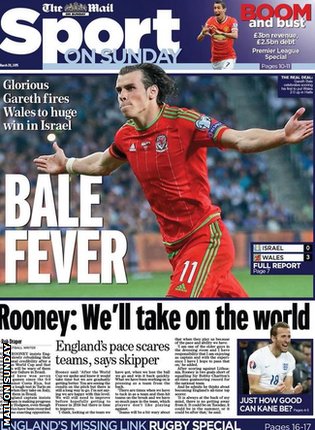 Colombia striker Radamel Falcao, 29, could join Juventus when his season-long loan at Manchester United ends, according to his agent. (Gazetta TV)

Qatari side Al-Sadd say they are in negotiations to sign Barcelona's Spanish midfielder Xavi. The club report the 35-year-old is in Doha with his family. (Al-Sadd website)

Liverpool's England right-back Glen Johnson, 30, could move to Barcelona on a free transfer. (Sport - in Spanish)

Liverpool target Mateo Kovacic will not be moving to Anfield. The 20-year-old Croatian midfielder will remain at Inter Milan according to his agent. (Mail on Sunday)

Jordan Henderson wants to stay at Liverpool for "many years" and will sign a new contract "soon." (Sunday Telegraph)

Newcastle have told interim head coach John Carver that he will be staying at St James' Park in some capacity. (Sunday Express)

Manuel Pellegrini will be sacked by Manchester City in the summer if the reigning Premier League champions finish outside the top two. (Sunday People) 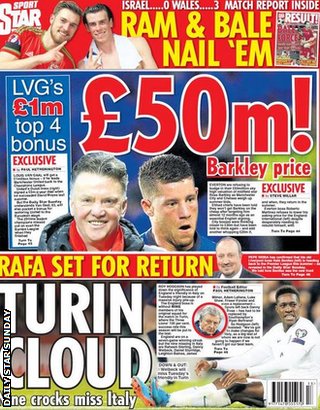 Louis van Gaal will receive a £1m bonus if he gets Manchester United back into the Champions League this season. (Daily Star Sunday)

A survey shows that the academies of the Premier League's current 20 clubs have produced just 57 first-team regulars over the past 10 years. (Mail on Sunday)

On-loan winger Nani, 28, is set to return to Manchester United next season from Sporting Lisbon as the Portuguese side can not afford his £3.6m-a-year wage demands. (Abola - in Portuguese)

David De Gea should be happy to stay at Manchester United according to fellow Spanish goalkeeper and former Liverpool player Pepe Reina. (Talksport)

West Ham could play in next season's Europa League thanks to the Fair Play League. (Sunday People) 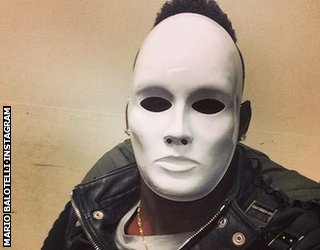 Liverpool striker Mario Balotelli has posted a picture on Instagram  of himself wearing a white mask with the caption "my mood today". The 24-year-old was not named in Italy's squad for their Euro 2016 qualifier against Bulgaria on Saturday evening and a friendly with England on Tuesday.

Real Madrid forward Gareth Bale has posted a picture on Twitter  of a very happy Welsh dressing room after their 3-0 win over Israel. The 25-year-old scored twice in the Euro 2016 qualifier.

Former American child prodigy striker Freddy Adu, 25, has signed for Finnish side Kuopion Palloseura. It is the 11th team of his career since he signed for MLS team DC United aged 14. (Mail on Sunday)