Chelsea are eyeing a move for Tottenham striker Emmanuel Adebayor, 31, to replace Didier Drogba at the end of the season. (Daily Express) 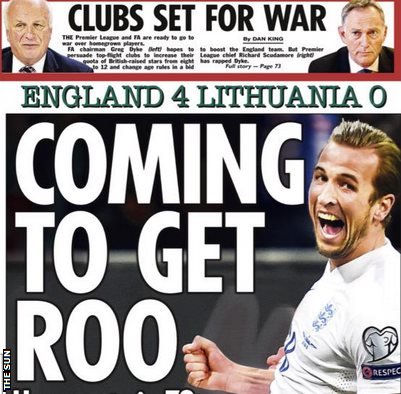 Arsenal manager Arsene Wenger has said that the club have begun contract negotiations with Theo Walcott, 26, after the winger stated the opposite on Twitter. (London Evening Standard)

Liverpool face competition from AC Milan if they are to land Borussia Dortmund striker Ciro Immobile and the Italian club are prepared to part with £13m for his services. (Talksport)

Borussia Monchengladbach are the latest European team to express an interest in Burnley's striker Danny Ings, 22, who is out of contract at the end of the season and available to clubs outside England for a minimal compensation payment. (London Evening Standard)

Phil Jones, 23, and Chris Smalling, 25, could be leaving Manchester United as the club are yet to open talks over new deals. (Daily Mail)

Queens Park Rangers talisman Charlie Austin, 25, is wanted by Crystal Palace in a move which could cost up to £8m. (Daily Mirror)

And QPR will demand £2m if Chelsea are to take goalkeeper Rob Green, 35, to act as understudy to Thibaut Courtois. (Daily Express)

Turkish club Besiktas have moved to distance themselves from reports suggesting they have met with the agent of Chelsea goalkeeper Petr Cech, 32. (Talksport)

Arsenal and Roma are leading the chase to sign Czech Republic international Cech in the summer. (Daily Telegraph)

Wojciech Szczesny, 24, is set for talks over his Arsenal career at the end of the season with the club lining up Chelsea goalkeeper Petr Cech to replace him. (London Evening Standard) 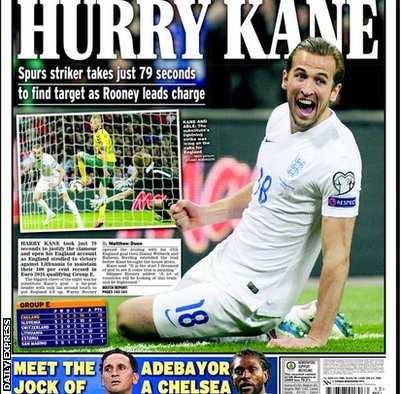 Harry Kane making the headlines again, this time in the Express

Tottenham boss Mauricio Pochettino agreed to post-season games in Malaysia and Australia after getting a guarantee from chairman Daniel Levy that he will be given complete control of the rest of the club's summer plans. (Daily Telegraph)

Stoke City striker Jon Walters has revealed he once had a major bust-up with Republic of Ireland's assistant manager Roy Keane, who was once his boss at Ipswich. (Daily Mail)

Bayern Munich goalkeeper Pepe Reina, 32, says his former Liverpool team-mate Steven Gerrard can leave the club on a high this summer and should not be overly criticised for his sending off against Manchester United. (Daily Star)

Atletico Madrid striker Fernando Torres is relishing playing up front with Barcelona's Luis Suarez in an all-star charity match with skippers Steven Gerrard and Jamie Carragher at Anfield on Sunday - but says he is unsure what reception he will receive from Liverpool fans. (Liverpool Echo)

Burnley boss Sean Dyche is hoping that last week's warm-weather trip to Spain will have the same positive effect on his side as last year when they clinched promotion to the top flight. (Lancashire Telegraph)

Crystal Palace are hoping to build a new club shop in the Selhurst Park car park in time for next season, chairman Steve Parish has confirmed. (Croydon Advertiser)

Within moments of Harry Kane's debut goal from the bench for England, Hull City midfielder Jake Livermore tweeted the Tottenham striker an image of his face superimposed on the Wolf of Wall Street. (Jake Livermore Twitter) 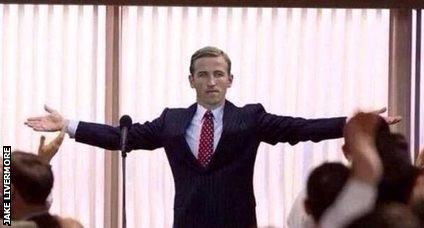 Tottenham midfielder Nacer Chadli was also quick to social media when Kane scored, tweeting:  "Congrats! He scores when he wants, he scores when wants."

Thierry Henry has revealed his fears for his former club Arsenal after saying he doesn't want the Gunners to follow on the same path as Liverpool and fail to win the Premier League in the next 25 years. (Metro)